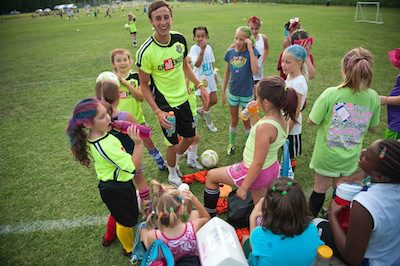 When eight British coaches recently arrived in the 501 for the annual summer soccer camp hosted by the Maumelle Soccer Club, the entire community – kids, coaches and business owners alike – joined together for a week-long celebration of the sport at the Rolling Oaks Sports Complex.

For its sixth consecutive year, the Maumelle Soccer Club coordinated an intensive week-long camp for kids ages 4-18 with Challenger Sports, a British company that conducts camps throughout the U.S., Australia and Canada. This year 193 kids participated. The eight Challenger coaches who conducted the camp are all college-age soccer players who travel on a week-to-week basis teaching soccer camps in the summer. 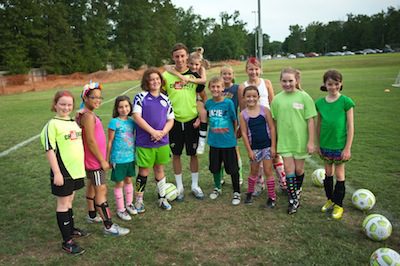 Whether they referred to the sport as soccer or football, those involved in the program were enthusiastic. Sessions ranged from basic drills to simulated World Cup tournaments. Teams (both recreation teams and classic or advanced tournament teams) were divided based on age, gender or skill level.

“With so many coaches, we really had the chance to split people up according to their skill level,” said Kelly Urban, coordinator of the camp. “We tried hard to give the participants the best experience for their money by separating competitive and non-competitive players.”

Luke Allison, a 22-year-old from Nottingham, was Challenger’s director for the camp in Maumelle. Playing soccer has been a constant in Allison’s life; he began playing at age 6 and went on to play for a college-age club in Cardiff, Wales. He has worked with Challenger for four years.

Allison led a team of seven other British coaches from ages 18-24, whom hailed from cities such as London and Liverpool. The coaches aimed to develop participants’ techniques in a variety of subjects, such as passing, shooting, heading and volleying.

“One of the biggest things the British coaches focus on is respect – respect for each other and playing well as a team,” Urban said. “It’s sometimes easier for kids to take advice from college-age coaches who can relate their experiences, rather than listening to parents.”

During the World Cup simulations, kids were divided into teams of about five and repeatedly played other teams throughout the night. Teams were encouraged to choose the country they wanted to represent. Urban’s 8-year-old son, Ethan, who was a participant in the camp, proudly wore the colors of the Netherlands – red, white and blue – in matches against teams like Brazil and Spain.

“The kids went mad for the World Cup games,” Allison said. “Those were definitely the main attractions of the evenings.”

The fun was not limited to the Rolling Oaks Complex. Urban said the entire community got involved in the festivities. Eateries such as Mr. Poncho Mexican Restaurant, Beef ‘O’ Brady’s and The Dreamy Spoon welcomed the English coaches to dine free-of-charge. In return, the coaches regularly posted schedules of where they would be eating and invited locals to dine with them.

From the obliging restaurants to the host families that lodged them over the week, Allison and his fellow coaches were astonished by the community’s generosity. “They threw us a party last night … restaurants even fed us for free. This was the first time in my career that something like that had ever been done,” he said.

Allison has never traveled this far south. Maumelle, his third stop on a summer-long tour, literally filled with week-long camps, might be his favorite community yet.

“I’ve traveled all around the West, East and North, but the people I met here are absolutely more friendly,” Allison said. “People here don’t seem to take things so seriously – and that’s not to say they aren’t serious about soccer.”

On the final night of the camp, a team of Challenger coaches played the Maumelle Maniacs, a local U17 soccer team. The event was so anticipated that Maumelle’s Mayor Michael Watson attended – he even played ball for a couple minutes on the Challenger team. The game was tied until the Maniacs came out ahead, 6-4, after a penalty shoot-out.

As for their future camp destinations throughout the summer, Allison and the other coaches have no idea where they will be going. “We don’t actually find out where we are going next until the Thursday before the start of the next session.” Though the scheduling sounds hectic, Allison said it keeps coaches from having to think too far ahead.

Leslie Kennard, vice president of the Maumelle Soccer Club, said the club, which operates year-round, consists of about 600-675 kids, ages 4-18. The club draws from the surrounding areas, although some kids come from as far as Roland and Otter Creek.

“We operate all year, even if we’re not in a regular season. The only time we really break is when the weather is just too bad. We want to make sure our kids have a ball at their feet at all times.”

During the summer the club offers free “TNT” sessions – Tuesday and Thursday night games that continue until school starts.