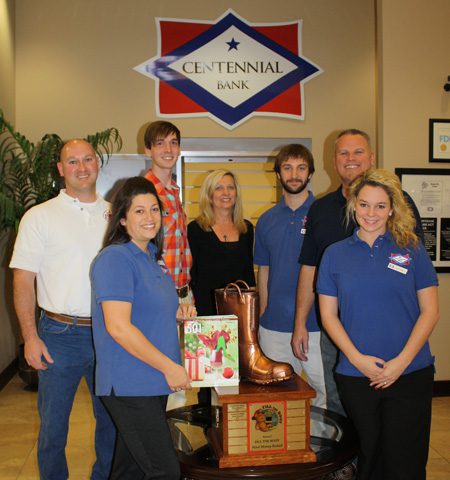 
More than 200 families in Faulkner County had a brighter Christmas, thanks to the hard work of local firefighters and the generosity of residents who contributed $45,000 for the annual “Fill the Boot” campaign.


Conway Firefighters Local 4016 organizes the annual campaign, which has raised almost $300,000 and provided gifts for 10,000 kids since it was created 14 years ago.


Beginning the Friday after Thanksgiving and continuing the following three Saturdays, off-duty firefighters and their families as well as other volunteers set up in parking lots at several locations to accept donations. Boots are also placed in local businesses to collect contributions.


Organizers then work with local school counselors to identify needs, purchasing and wrapping Christmas gifts for those families.


The Centennial Bank location on Hogan Lane in Western Conway was presented with the “Boots in Business” traveling trophy for collecting the most money this year – $1,000. This is the second year for the location to claim the trophy. The branch collected $555 last year.


Billie Carter, chairman of the Fill the Boot committee, commended Mitchell and her employees for their hard work. “She has set the bar high for fundraising,” he said.


According to Carter, proceeds from this year provided gifts for 215 families with additional support helping other organizations like the Salvation Army and CAPCA. He said numbers were down a little from last year – both in collections and the number of families served but “the Lord makes sure we raise enough for the need.”


Plans are already in the works for next year’s Fill the Boot campaign, according to Carter. He said organizers hope to expand their efforts and provide assistance to families in Perry and Cleburne counties.


“We want to thank the volunteer fire departments in the county,” said committee member Tim Capps. “Without them, we wouldn’t have the manpower to continue to do this. Extra special thanks to the citizens of Faulkner County for their help in making this dream come true.”