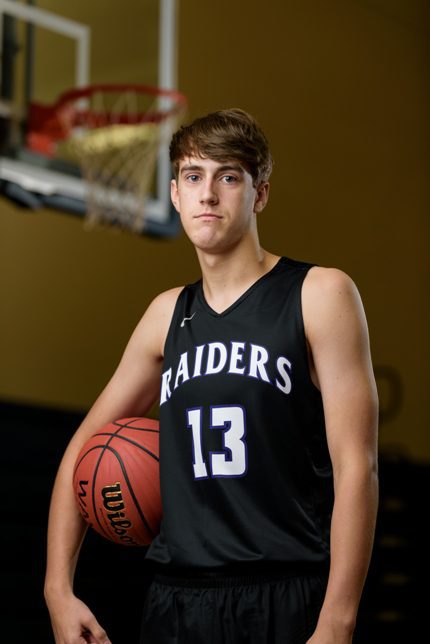 
Garret Finley is a big deal at Riverview. In addition to his team-leading blocks and rebounds, the 6-foot-5 junior forward uses his physicality to lead his team to victory.


“My size gives me many advantages,” Finley said. “As a big man, I can rebound, post up and shoot. Whenever my team needs a big play, they can rely on me to get the job done.”


Finley was selected to this year’s 501 Basketball Team — 34 players representing the best the 501 has to offer both on and off the court. The junior was nominated by his head coach, TJ Coleman. The team is sponsored by First Security Bank and First Service Bank.


“Garret is a versatile offensive player and a very good scorer,” Coleman wrote in his nomination. “He has great size for the high school game and has a lot of basketball skill. We expect him to lead by example and continue to improve his game. We expect him to be a great player for us.”


After reaching the Class 4A quarterfinals a year ago, the Raiders (9-4, 5-2 2-4A) are back for more in 2017. As the team dives into conference play, Finley says the team plans to soar to new heights.


“Things are going well for us this year,” Finley said. “We’ve lost a few games that we shouldn’t have lost, but we’re playing really well as a team and are shooting the ball better every game. All of our players, including our bench players, are stepping up and making big plays for us. We want to win a championship this year. We have the ability — we just have to work together, play together and make big plays.”


Finley creates an atmosphere of trust and maturity on the court.


“Garret is a vocal leader,” Coleman wrote. “He leads by example, is fun to be around, encourages others to get better and do things the right way and he is always willing to help a teammate with a concept or strategy if they don’t understand.”


Off the court, the honor-roll student is a member of 4H, FBLA and FCCLA. He enjoys spending time with his family and assisting the youth in his community.


“I want to be a basketball coach one day,” Finley said. “I like to help the peewee players with their dribbling, shooting and layups. They look up to me. I tell them if they keep working hard, they’ll be where I’m at one day.”


“Garret enjoys giving back to the community by working with the younger kids,” Coleman wrote. “He goes to the elementary schools at Riverview and reads to the kindergarten class, and teaches and practices with the peewee basketball program.”


In his free time, Finley focuses on improving his game.


“Garret plays basketball all year round,” Coleman wrote. “He also plays AAU basketball with a team in Vilonia. He loves the game and has used it to help him grow up to be a mature, respectful, hard-working young man.”