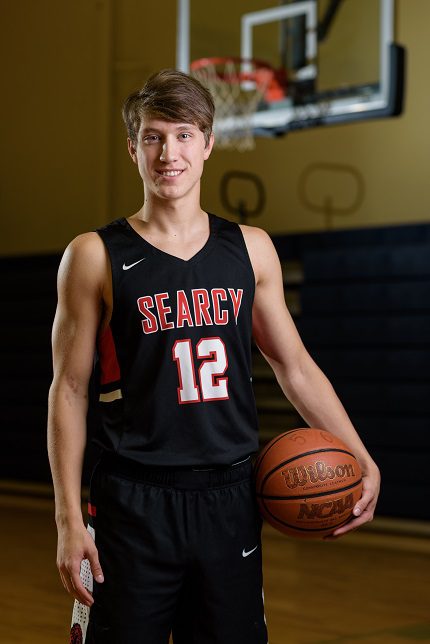 When a knee injury threatened to take him away from the game he loved, Searcy senior Joe-Todd Smith rediscovered what it was that made him pick up a basketball in the first place.

“In the final game of my freshman season, I tore my ACL,” Smith said. “Since then, I’ve underwent three different surgeries on the same knee, and I have spent years in physical therapy. I missed my entire sophomore season because of it.

“Going into my junior year, it was tough getting back into the swing of things. At the beginning of this season, I told myself that I just wanted to have fun and enjoy my last year with the team and play the best basketball that I can while trying to make others around me better.”


Smith was selected to this year’s 501 Basketball Team — 37 players representing the best the 501 has to offer both on and off the court. The team is sponsored by Conway Ortho and Sports Medicine, Conway Regional Health System and First Security Bank. The senior was nominated by his head coach, John White.

“Joe-Todd is a very quick and explosive athlete who shoots the ball very well,” White wrote in his nomination. “He is a very good student who has a personality that everyone likes. His teachers talk about how he is their favorite student, and he represents our community in a very positive way.

“Joe-Todd is very excited to play basketball this year. Last season, he did an excellent job of hitting open shots, rebounding and defending. We expect him to be a factor for us at both ends of the court this season.”

Having dropped nine of their last 10 games, the Lions (4-13, 0-2 Class 6A East) are continually focused on improvement, but may be on the verge of a turnaround.

“We’re struggling to find ourselves as a team right now,” Smith said. “Though we haven’t won many games this season, we’re working hard to be better than last year. Day in and day out, Coach White has been an incredible coach for us and shows us that all he cares about is us and this team. He is really committed to his job.

“Earlier this week, we played our best game of the season against Morrilton and almost got the win against a quality opponent. We led most of the game, but fell apart in the last minutes of the fourth quarter. Despite the loss, we played together, and I think that there’s a lot to be excited about going forward for our team.”

The Lions face a tough foe in Greenbrier this week, but are hoping to utilize some of the things that the team has learned to get the job done.

“To prepare for Greenbrier, we’ll need to win the rebounding battle and share the ball to get something going offensively,” Smith said. “If we can keep improving the way we have been on defense, it will be positive for us going into the game against Greenbrier.”

Off the court, Smith gives back to the youth in his community as a coach for Upward basketball. After high school, the senior plans to pursue a degree in physical therapy at the University of Central Arkansas in Conway.

“I’ve been around physical therapy for a few years, and I would like to help people the same way that my therapists have been able to help me,” Smith said.

Despite the adversity he has faced, Smith hopes his story inspires those to overcome their personal challenges.

“In everything I do, I like to have fun,” Smith said. “It’s easy to forget that basketball is simply a game. I like to make things fun in practice and joke around with my guys. We work hard, but find time to find the lighter side of things, too. Never give up and never get discouraged.”