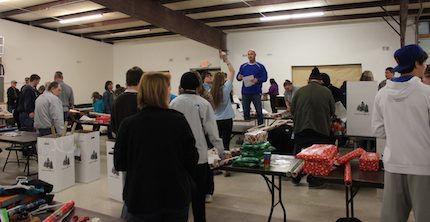 Volunteers gathered last week at a vacant building in Conway to wrap presents for the children and families that will be assisted this year through the annual “Fill the Boot” campaign.

Conway Firefighters Local 4016 has organized the special fundraising campaign — called “Fill the Boot” — to collect money to purchase gifts and clothing for needy children. This is the 16th year of the campaign, which has grown in size each year since it began.


Starting immediately after Thanksgiving, Faulkner County firefighters have had a boot in hand at several locations in Faulkner County, collecting money. Boots were also set up at several businesses to accept donations.


According to Fill the Boot organizer Billie Carter, about 263 families and 1,200 children benefitted from the program this year. Monetary donations totaled about $40,400 but contributions were still being accepted.