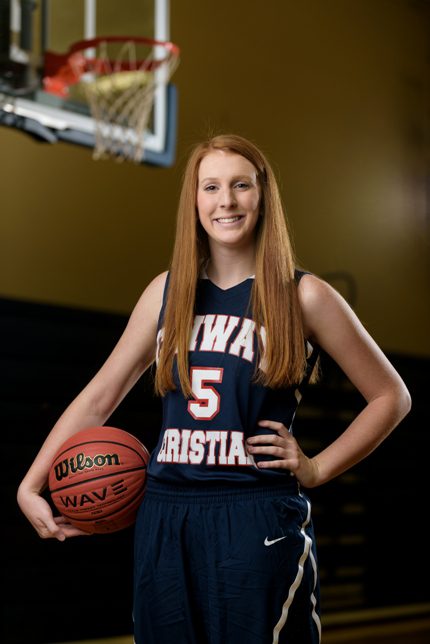 
Adrianna Ferrand entered her senior season with a singular goal — to be an impact player.


“I want to be someone who made a difference when they stepped on the court,” Ferrand said. A center for Conway Christian, she knows what it means to be an upperclassman, and she relishes the responsibility.


“This season, our team goal is to make it to the state tournament,” Ferrand said. “We are very small this year, but we are still a group of competitors that want to win. Senior high basketball [is] a more aggressive game, but it also comes with much more responsibility, and the games have more weight. The pressure to be great seems to increase with every game.”


Ferrand was selected to this year’s 501 Basketball Team — 34 players representing the best the 501 has to offer both on and off the court. The team is sponsored by First Service Bank and First Security Bank. Ferrand was nominated by her head coach, Jamie Williams.


“Adrianna is a hard-working, very strong basketball player,” Williams wrote in her nomination. “She is very vocal and leads her team very well, on and off the court. Adrianna gets to practice early, demands excellence from her teammates and leads by example. I expect her to carry her team defensively and also lead her team to the state tournament this year.”


Ferrand was an all-state selection last year as a junior and helped lead Conway Christian to the 2A state tournament.


Ferrand moved to Conway from Louisiana in 2002. For her, Conway Christian is home; it’s more than just a community.


“My ninth grade year, the district tournament finals fell on the same day as winter formal for our school,” Ferrand said. “Because we were freshmen, it was our first year to go to formal. It was also my brother’s senior year, and it would have been the only year we would have been able to go to the same winter formal. We thought we weren’t going to make it.


“Right before tipoff, a parade of guys in tuxes and girls in prom dresses walked into the gym. Many seniors, juniors and sophomores, including my brother, came to our game in their winter formal clothes to support us. We ended up winning the district tournament and were able to make it to the last part of the formal.”


“Adrianna is ranked in the Top 5 in her class and works very hard in the classroom,” Williams said. “Adrianna carries a 4.1 GPA and has scored a 28 on her ACT. She cares about her academics and helps others around her succeed. She is a well-rounded student athlete. She’s very active in her church and with her youth group.


“Adrianna works hard all year long to be the best player she can be. She also led her volleyball team to the state finals this year. She works hard, but also sets a good example of how a player should act on and off the court.”


At Conway Christian, Ferrand is a member of drama club, Beta club and history club. She teaches a children’s class on Sunday mornings at her church. After graduation, Ferrand plans to attend Louisiana Tech and study interior design.