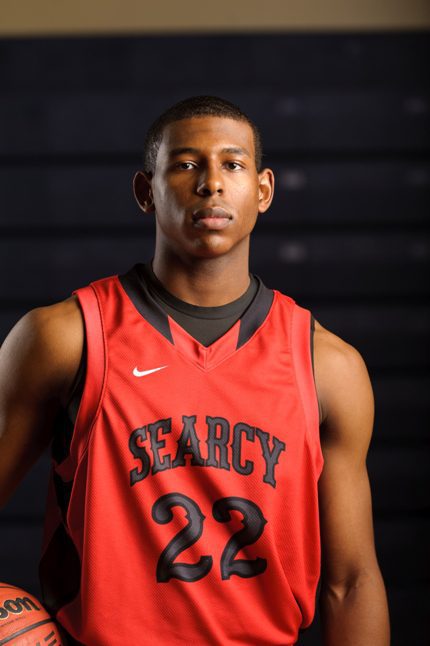 
When Searcy senior guard Simon Medley steps on the court, he not only battles his opponents, but he also battles himself.


“Everyone makes bad plays and everyone plays bad games. Through experience, I learned that it’s not about whether or not you make mistakes. It’s about how you overcome those mistakes and encourage others that helps you face your fears and ultimately helps you get better at the game.”


Medley was selected to this year’s 501 Basketball Team — 35 players representing the best the 501 has to offer both on and off the court. He was nominated by his head coach, Jim Summers.


“Simon’s best qualities are his leadership and his consistency of heart,” Summers wrote in his nomination. “He has high character, is an uplifting teammate and is a good teacher to the younger players.”


With Tuesday’s 55-49 loss to Mountain Home, the Lions (3-18, 0-10 7A/6A East) have been eliminated from Class 6A state tournament contention. Though the team fell short of its goals, Medley says that it wasn’t a failed season.


“As a senior, it hasn’t been the season I wanted,” Medley said. “However, I’ve still accomplished a lot. This year, I became a leader for my team on and off the court. I put 100-percent effort into everything I did so that others could follow me. We didn’t win a lot of games, but I think we grew closer as a team through that adversity. We’ve learned about perseverance — digging deep and never giving up.”


As he prepares to don his No. 22 jersey for the final time Friday, Medley says he has no regrets.


“I just want to finish strong,” Medley said. “Cabot is a really good team and we’ll be underdogs, but winning isn’t impossible. If we can knock down shots, make plays and minimize mistakes, we can do anything. Years from now, I want to be able to look back on this game and know that when I stepped on the court that last time, I battled as hard as I could with my team beside me. A win over a quality team like Cabot would not only be a great way to end our season, but my high school basketball career as well.”


Medley’s “never give up” mentality developed from an unlikely comeback victory.


“Two years ago, my AAU team was playing in a tournament and we were trailing by 12 points with 1:20 to go,” Medley said. “The other team had already started celebrating and it sparked something in us. We hit four 3-pointers to tie the game, and we stole the victory in the final seconds. It was a game I’ll always remember. It not only brought us closer as a team, but it taught us to never give up.”


Raised in a basketball family, Medley grew up watching his older sister, Kayla, on the court. For the senior, picking up the game seemed like something he was destined to do.


“My oldest sister was really big into basketball and played AAU ball,” Medley said. “My family and I were always traveling around watching her. Seeing what she did on the court, it made me want to play, too. I started playing when I was 6 years old and have never stopped since.”


Through playing the game he loves, Medley not only made great memories, but great friendships as well.


“One of my closest friends is my teammate, Jeremiah Clifton,” Medley said. “We’ve grown up together since elementary school. We’ve played basketball together for years. We’ve been through many things together, on and off the court. What we have is more than a friendship — it’s a brotherhood.”


Off the court, Medley participates in French Club and French Honorary and leads a Bible study group at Searcy High School. He is also active in his youth group at The River in Searcy. After high school, the senior plans to attend college to pursue a degree in business or kinesiology.


“I’m planning on attending Arkansas State University in Jonesboro,” Medley said. “I’m excited to continue my academics on the next level.”


Win or lose, Medley is sure of one thing — after the final buzzer sounds on Friday, the senior wants to be remembered for his work ethic.


“I’ve never been the most athletic or the best player out there,” Medley said. “But if you were to ask anyone about me, they’d tell you that I’m a hard worker. My dad has really pushed me to be the best that I can be. From going to the gym at 6 a.m. daily to work out and practice, I’ve tried to take all the talent that God has given me and add to it. Hard work is important to me and it’s a quality that will be valuable to me throughout my life.”