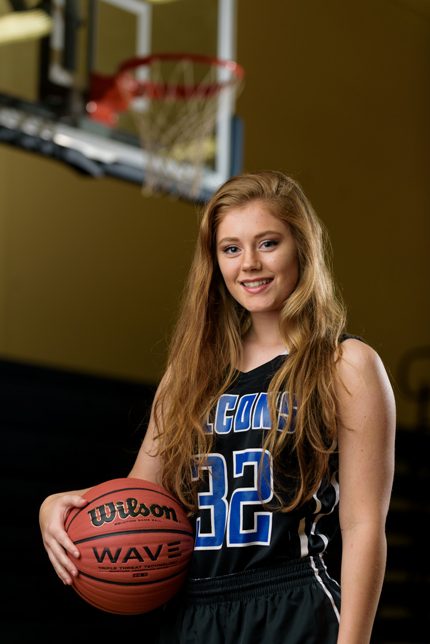 
Victoria Gerbholz competes fiercely on the court, but she knows internal competition off the court is just as important. For her, it’s all about accountability.


“If we are on break, the coaches will give us assignments of running, shooting and working out,” Gerbholz said. “It’s easier to have someone push you at practice than to push yourself when no one’s watching.”


Gerbholz, a senior guard/forward for the Faulkner County Falcons, was selected to this year’s 501 Basketball Team — 32 players representing the best the 501 has to offer both on and off the court. Gerbholz was nominated by her head coach, Scott Coffey. The team is sponsored by First Service Bank and First Security Bank.


“Victoria is sure-handed with the ball, fearless, anticipates very well and has a great sense of doing the right thing at the right time,” Coffey wrote in his nomination. “She also makes strong drives to the basket and is very good from the free throw line. Most importantly, she is a Christ-like example to those around her. Victoria is also loyal, level-headed, respectful and encouraging to her friends and teammates. She’s a joy to be around, and I look forward to seeing how God works in her life in the future.”


Gerbholz has been playing organized basketball since the first grade, but she started “shooting and dribbling outside with my siblings as early as I can remember.”


Through two official games, Gerbholz is averaging 19 points and 12.5 rebounds, and is shooting 50 percent from 3-point range. “My biggest personal goal right now is to be a better 3-point shooter.”


As the Arkansas Christian Homeschool League season is just getting under way, Gerbholz and the Falcons are still figuring out their team identity.


“Our team goal is tempo,” Gerbholz said. “Every practice and game our coach is telling us to keep the tempo up and not get lazy. A big personal challenge to overcome on the court for me is keeping a poker face at all times. I get really into the game, and I want to get mad if the refs aren’t calling it right in my opinion. I just try to remember the No. 1 thing is to act Christ-like and be an example to everyone watching.”


Last season, Gerbholz led the Falcons in scoring, free throw shooting, rebounding, steals and assists. This year isn’t about the numbers — it’s about the relationships.


“Really, it’s just about spending time with these amazing girls,” Gerbholz said. “Win or lose, we are there for each other, and we encourage each other so much. I don’t think there has ever been a group of girls spending this much time together without some major drama, and although we get upset with each other sometimes, at the end of the game, it’s all encouragement — whether it is on the court or just us hanging out at each other’s homes. I love them all, and I know I have made some friends for a lifetime.”