26 Oct ‘Faithful to God, family and his country’

In sending the photo (which appeared in the October issue), Jeff wrote:

“I am an Arkansas National Guard Physician Assistant on deployment to Afghanistan and my wife Diana Tate of Mayflower picked up the latest copy of 501 LIFE and sent it in a care package, which takes about three weeks to get.

“I received it while doing a remote Village Medical Outreach Program (VMOP). The little boy pictured came up beside me and was curious as to the magazine I was looking at. Earlier, it had taken some work to bribe him with a granola bar to try to befriend him.

“We both enjoyed looking at the pictures and I would describe Arkansas through the interpreter. He was especially taken by the story in the August edition about the kids’ swimming program, and was amazed that there are such places. Thank you.”

In light of the unique nature of the photo, we felt a followup article was in order so, we contacted Jeff’s wife, Diana, and invited her to the 501 office.

According to Diana, Jeff works at the base clinic at Camp Robinson and has been deployed with a Mississippi unit. He left home

in March for a three-month training session in Wyoming because the terrain and climate is similar to Afghanistan. He and one other soldier are the only Arkansans with the group.

Originally from Springdale, Jeff served overseas while on active military duty but this is Diana’s first deployment experience.

She’s aware of others who have had deployments that have lasted 18 months, so she’s thankful that Jeff’s is only supposed to be 10 months. “I feel blessed that ours is as short as it is.” 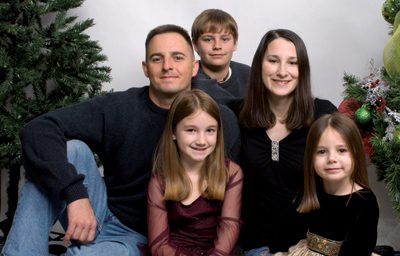 The couple has three children – 5-year-old Kristen, 9-year-old Bailey and 14-year-old Jared – and they have lived at Mayflower for two years. Diana is originally from Mountain Home and they have no family in the area but they have met and made friends through their church, New Life in Conway.

Understandably, with dad away it is hard.

Diana said the separation is particularly difficult on their 5-year-old because she’s a “daddy’s girl” who likes to snuggle. “She misses that. She prays every night for her dad.”

Diana said they pray Psalm 91, a verse of protection, for Jeff.

While Jeff is many miles away, the family is able to stay connected through the internet and that helps. Of course, there is nearly a 10-hour difference between the time in Arkansas and in Afghanistan.

“I talk to him almost every day by email or when he calls,” Diana said.

Jeff’s unit is expected home in February or March, and Diana said the time seems to be going by real fast. “The kids keep me busy,” she said, adding that she knows there may be tough times ahead. “With Thanksgiving and Christmas coming up, that’s going to be really hard.”

After her visit to the 501 office, Diana shared some additional photos that Jeff took overseas. “I am so appreciative that you chose to place my husband’s picture in your magazine,” she said. “I am just so insanely proud of him! He is an amazing husband and father. Jeff is faithful to God, his family and his country.

“I hope when people see the picture that they remember the sacrifice that is being made by all of our servicemen and women.”