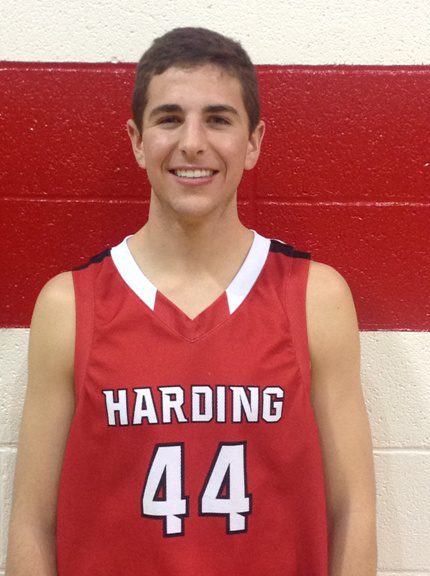 
The hunger of a champion can never really be satisfied. Such is the case for Harding Academy’s Hayden Mathews.

As a sophomore, Mathews was a part of Harding Academy’s state championship team. Now, as a senior, Mathews is aiming to go out a champion once again.


“Winning is fun, but it doesn’t always happen,” Mathews said. “We want to have no regrets when we play, so we’re always working our hardest. Our team theme is our main goal, which is keeping our ‘eye on the prize’ from Hebrews 2:12.”


Mathews was selected to this year’s 501 Basketball Team, which boasts the best the 501 has to offer both on and off the court. Mathews was nominated by Harding Academy’s head coach, Brad Francis.


“Hayden is very versatile,” Francis wrote in his nomination. “He has hit the outside shot and has the ability to play with his back to the basket. He is a leader both on the court and off the court.


“He has a servant attitude and cares about people and the school as a whole. He is not so focused on his own activities that he doesn’t see the big picture.”


The senior forward has been playing basketball since “I was born.”


“My dad was a basketball coach, so I was around the sport more than most people,” Mathews said.


Francis describes Mathews as a “high-energy person and player,” but that high energy can come at a high cost at times for Mathews.


“I am a passionate player and sometimes I allow my emotions to get the best of me,” Mathews said. “I need to only control myself and not try to control what I can’t. Modeling my life after Christ is a challenge, but it is my greatest joy to strive for every day.”


Mathews is a multi-sport athlete for the Wildcats. In addition to basketball, he also runs track and cross country and plays tennis. Off the court, Mathews is a member of Youth Advisory Council (YAC), Beta Club, student association (president) and Kerusso Club. He attends College Church of Christ in Searcy and is active in the youth group.


In his free time, Mathews enjoys “being out in God’s beautiful nature.”


“Riding bikes, hiking and being with my friends are things that I love to do,” he said. “Arkansas is a beautiful state. I love living here because of the great Christian environment. It has shaped me into the person that I have become.”


As of press time, the Wildcats had yet to play their first district tournament game against Bald Knob. If they win their first game, they will earn a berth into the regional tournament.


“I feel very positive about the team,” Mathews said. “This year we have played one of the toughest schedules in our basketball program’s history. I feel like this tough schedule has prepared us for tournament time.”