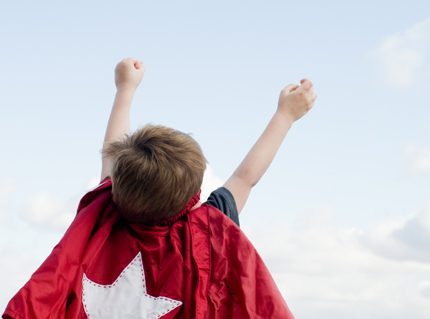 When Gina and I bought our house as our family was just starting out, we knew that we’d picked the right one. There was a large open field with ATV trails all over it and a few acres of woods where we could hike together as a family.

Our son, Roman, and I would go on epic adventures back in those woods as we’d slice away at everything with sticks like any 4-year-old boy would want to. Pretending that we had machetes, we fought through jungle forests, battled enemy armies and learned firsthand how long it takes for a raccoon to decompose. I have documented photos that should never be converted to scratch and sniff.

I’d always jokingly told my son that when I went to work, my job was to fight bad guys, and he always believed me. In his mind, I was so muscular that even my triceps had triceps. On a walk through our woods, we found a large old tree that was rotten with termites. Roman started hacking away at it with a stick, and I saw my opportunity. I knew the tree trunk was so weakened by the decay that it wouldn’t be hard to push this thing over if I really put my back into it.

As I pushed over this massive tree trunk and it splintered to the ground with a thud, I looked over at my son’s face. His mouth was open so wide and he just stared at me while his stick fell slowly out of his hand onto the forest floor. It’s as if his brain was dripping out of his ears like a melted snow cone in pure awe and wonder at what he’d just witnessed.

“Dad, that’s so awesome!” he shouted. With my chest out and my son in tow behind me, we walked back home. He ran in the door and screamed to Gina that I was, in fact, Mr. Incredible from the Pixar movies. Not a bad moment for a father.

As a kid, the first movie I can remember seeing in theaters was the first Superman with Christopher Reeve. Walking out of the theater, I don’t think my feet touched the ground because I was in a daze. He was the perfect specimen of heroism, and I secretly wished that these weren’t my real parents taking me home — rather I was from another planet and had super powers.

Over the years, my view of heroes changed as I grew up.

I enlisted in the United States Air Force and watched people put their lives on the line to protect our way of living. I saw fathers and husbands in the workplace that loved their wives and kids as they lived with Godly conviction and integrity.

The Bible is filled with stories of people I can relate to because they didn’t act all that heroic. They stuttered, quit, cheated, complained and gave God a lot of reasons to pick somebody else. But they all had an impact right where they were, and we’re reading their stories still today.

We can have that kind of life that’s legendary — if we put God at the center of our everyday everything. Heroism is telling your kids that they’re incredible and that you believe in them.

It’s heroic to reach across the table for your wife’s hand and pray with her when everything inside of you makes you think it’s going to be awkward. Sometimes we think that we can’t make a difference or that we have to grace the cover of a magazine or newspaper to really arrive. Heroism starts by doing for the one what you can’t do for the crowd. And God has your back.

“For I know the plans I have for you,” declares the Lord. “Plans to prosper you and not to harm you, plans to give you hope and a future” (Jeremiah 29:11). Scratch and sniff you some of that right there.

Neil Greathouse is a pastor at New Life Church in Conway. He and his wife, Gina, have three kids. Neil can be reached at [email protected].