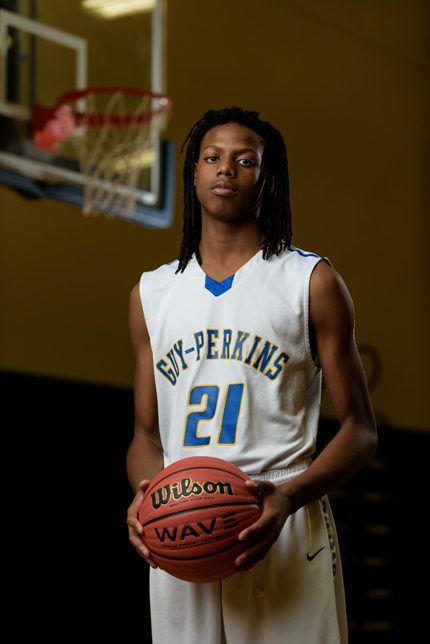 
Guy-Perkins lost just one game last season. Unfortunately, it was that single loss which ended the team’s season in the Class A quarterfinals. Building on last year’s success, the Thunderbirds return with great motivation to win it all in 2017.


“We came close last year, but we have to keep pushing ourselves to work together and be united as one,” said senior point guard Jahcoree Ealy. “This year, our goal is simple — to finish the job and win state.”


Ealy was selected to this year’s 501 Basketball Team — 34 players representing the best the 501 has to offer both on and off the court. Woodfin was nominated by his head coach, John Hutchcraft. The team is sponsored by First Security Bank and First Service Bank.


“Jahcoree has great work ethic and is very encouraging to his classmates and teammates,” Hutchcraft wrote in his nomination. “He is a great defensive player and is one of our leading scorers and rebounders. As the team captain, I expect him to lead the team on and off the court by example.”


Off to a strong start to the season, the Thunderbirds recently suffered a setback with a key player’s injury.


“One of our best players — Josh Ballard — is hurt right now,” Ealy said. “Not having him has been a challenge for us. I’ve had to step up and score more, and we’ve all had to put in extra work in order to get the job done on the court.”


Ballard’s absence has propelled Ealy into a larger role on the team — one the senior embraces as an opportunity to lead his teammates.


“I’m trying to keep everyone motivated,” Ealy said. “I tell the team that if they want to be successful, they have to put in extra work. Once [Ballard] is back, we’ll be rolling, but until then, we have to up our game every day and never take a day off.”


According to Ealy, one of the Thunderbirds’ strongest assets this season is his chemistry with teammate Trey Minton.


“Trey is like a brother to me,” Ealy said. “We’ve been playing together since we were little. I always know where he’s at on the court, and he always knows where I’m at. Because of that, it makes it hard on our opponents because they can’t guard both of us at the same time. We spend a lot of time together off the court, too, just hanging out, watching basketball, talking and eating.”


Over the years, Ealy has become known for his towering defensive presence on the court. The 6-foot-4 senior has been named Defensive Player of the Year two years in a row.


“It feels good to be recognized for my hard work,” Ealy said. “It motivates me to keep pushing myself to get better. I’m a big shot blocker. No matter where I am on the court, I can get to the ball and get my hands on it as it’s going up.”


“Durant is my favorite player,” Ealy said. “I like how he uses his ability to pull up from anywhere on the court and knock it down. That’s something that I try to do, too.”


Off the court, Ealy is involved with Beta Club, FBLA and FCCLA. He gives back to his community through the youth group at Solomon Grove Baptist Church in Twin Groves.


“We spend a lot of time with the elderly at a local nursing home,” Ealy said. “I try to be an encourager and a motivator to others.”


“Jahcoree has a great smile and is loved by his community,” Hutchcraft wrote. “He is one of the most respectful young men on the team and at school. He has quite a few young Thunderbirds that look up to him, and he handles that very well. He is an outstanding leader and a potential college player.”


After high school, Ealy plans to pursue a psychology degree at Connors State College in Oklahoma.