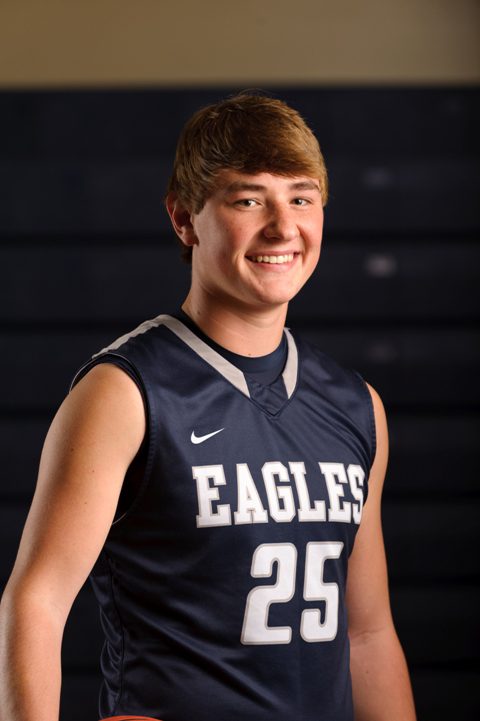 
Conway Christian forward Jakob Henry is a young man who thrives on competition. Whether it be on the baseball field, football field or basketball court, the multi-sport senior never backs down from an opportunity to display his athletic finesse.


“My life revolves around athletics,” Henry said. “When I’m not playing for one of the school teams, I’m playing pickup basketball or sports games on Xbox with friends. My dad was a big basketball player, and I’ve always been a big competitor. From an early age, I knew I’d love the game due to the competition and fast pace of it. I got my start with Upward Basketball when I was young and loved it ever since.”


Henry was selected to this year’s 501 Basketball Team — 35 players representing the best the 501 has to offer both on and off the court. Henry was nominated by his head coach, Austin Mitchell.


“Jakob is an extremely hard worker whose engine never stops,” Mitchell said. “He has a great feel of where to be on the court, which allows him to always be in the right place at the right time. His understanding of the game is a great attribute to have and tends to help his teammates gain confidence on both ends of the floor.”


As Conway Christian’s quarterback, Henry and the football Eagles enjoyed a successful season, reaching the Class 2A semifinals before falling to eventual state champion McCrory. However, while Conway Christian was still suiting up to take the field on Friday nights, their basketball competition was practicing and getting more experience on the court.


“It’s a hard transition from football to basketball,” Henry said. “There’s a big difference in being in shape for football and basketball. Most of our basketball team plays football, too, and we had to cancel most of our nonconference games to focus on our football team. We haven’t picked up a basketball since our last game last year, and we’re a little rusty right now. We’re still remembering how to get our shots off and how to get our legs under us.”


Despite the lack of experience, the Eagles are off to a 1-0 start to the season with a 50-30 win over Western Yell County. According to Henry, with a little focus, the Eagles can get back into basketball shape soon enough.


“It’s going to take hard work and dedication to be successful.” Henry said. “We return four starters this year, and Coach Mitchell has high hopes for us. I have high hopes, too. We have some really good athletes this year. If we can get hot at the right times and play together as a team, then I think that we can make a run through the state tournament this year.”


“As a result of his hard work and dedication to the many sports he plays, Jakob’s work ethic is contagious, making him a leader by example,” Mitchell said. “He constantly is building others up, which always goes a long way for any team. I expect him to receive all-conference and all-state honors. I believe he is very capable of these honors and will be a huge part of our success this season.”


Despite his many successes on the field and court over the years, what makes Henry’s versatile athletic career even more remarkable is the fact that it almost didn’t happen.


“My whole life has been an obstacle,” Henry said. “Born with Erb’s Palsy, I have always had limited range of motion in my right arm. When I was born, my parents were told that I would never be able to play sports. It’s taken a lot of hard work and dedication on my part to get to where I am today, but it’s also God working for me. I couldn’t do what I do today without Him.”


Another personal challenge that Henry endures is that of an ailing family member and role model.


“My grandpa was diagnosed with prostate cancer a few years ago,” Henry said. “He is a big influence in my life and has always been at every one of my games. It’s tough watching someone that you’ve looked up to your entire life struggle like that.”


Off the court, Henry serves as student council president at Conway Christian and is active in Drama Club, History Club and Beta Club. As a member of Conway Christian’s outreach program, Henry assists those in need within the Conway community.


“Once a month, our outreach program goes out and serves somewhere in the community,” Henry said. “We’ve been to the Bethlehem House in Conway to cut bread and organize shelves, and we’ve also helped tornado victims in Vilonia with the cleanup effort.”


“Jakob is a Christian and knows that his main purpose in life is to be Christ-like and lead others to Him,” Mitchell said. “Jakob is a born leader on and off the court. He excels in the classroom by maintaining a 3.99 GPA.”


In addition to football and basketball, Henry plays pitcher and first base for Eagles baseball. After high school, Henry will continue his athletic career at the University of Central Arkansas in Conway, where the senior recently committed to play baseball.


Conway Christian plays host to Guy-Perkins at 5:30 tonight and Quitman at 6 p.m. Friday.