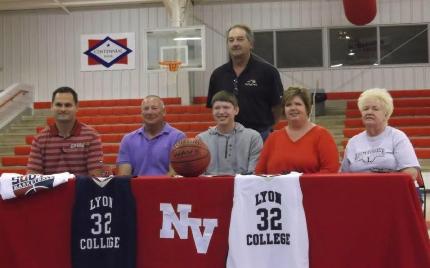 Ty Virden’s dream of being a college basketball player is finally coming true.

Virden, a 6-foot-5 guard/forward/center for Nemo Vista High School, has signed a letter of intent to play college basketball for Lyon College in Batesville.


A son of Tresa and Terry Virden of Greenbrier, he is a senior at Nemo Vista where he plays basketball and baseball for the Red Hawks. Virden averaged 18 points and nine rebounds as a junior and received all-state in basketball and all-conference in baseball for two years. He was recently named to the 501 LIFE Basketball Team, and feels honored to be chosen among so many great players in the surrounding areas.


Virden first played organized basketball when he was in the second grade in the Morrilton youth league. He continued to play through Greenbrier and Nemo Vista youth leagues. He’s also played for several summer AAU teams including the Little Rock Kings, Hendrix Warriors and Conway Kings.


Last summer, he played for Arkansas Wings, which was coached by Matt Hall. During the AAU national tournament in Kentucky, Virden received national attention from numerous college coaches including Lyon. After some letters, phone calls and campus visits, he decided Lyon College was the place for him.


“We are really excited about Ty coming to Lyon College,” said Lyon head coach Chad Tapp. “He fits so much of who we are as a campus, and he fits into the framework of what we’re trying to do as a basketball program. We are excited to see the growth he had this year with Coach Harris, and we are going to try to continue upon that growth in his next four years at Lyon.”