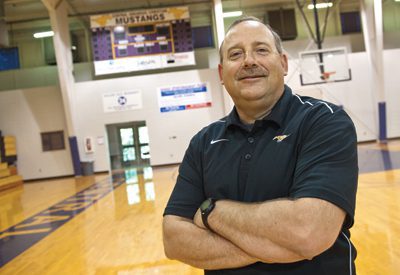 Steve Quattlebaum has never been so proud of a losing record.

In 27 seasons coaching girls basketball, including 16 at Central Arkansas Christian, Quattlebaum has built a career record of 504-194, including 360-137 with three state championships at CAC. The Lady Mustangs finished 19-10 this season and reached the Class 5A state quarterfinals for the second straight year.

His Mustangs started 0-8 and lost their first three games in 5A-Southwest conference play. But at one point, they won seven of 10 en route to an 8-17 finish that included an appearance in the Class 5A State Tournament.

The only previous losing season of his career was his second at CAC. The 1996-97 Lady Mustang squad finished 9-16.

Quattlebaum never dreamed he’d take both his teams to the state tournament in the first year of his dual role.

“We weren’t sure, to be honest, we’d win any games,” he said of the Mustangs’ preseason prospects. “We had no experience, almost zero points coming back from the year before, zero rebounds.”

One memory in particular stands out to him as he made the transition. For years, he’s run a shooting drill with his girls in which they see how many shots they can make in two minutes.

“We had to quit doing it when the girls were around. They were laughing at them. But they’re up to the 30s and 40s now. The girls got 60 the other day. I think that might be a record.”

Since most of the Mustangs played football, Quattlebaum didn’t get them in the gym until November. A tough schedule awaited them, including an early game against Sylvan Hills, which eventually finished runner-up to Alma in the state tournament.

But they kept working, kept scrapping. Along the way, there were a few player defections. By the end of the season, their numbers were down to nine, thanks to mononucleosis.

“We lost several players along the way, but the ones we’ve got are a good, solid group,” Quattlebaum said. “They play hard and practice hard, and they’re really fun to coach. We don’t have to worry about them much; we just go out and coach them. They’ve really been pretty easy and pretty enjoyable.”

He praised the two seniors who finished the year, Sam Stringfellow and Kevin Evans.

“They made our job a lot easier,” he said. “They stuck with us. They held us together. They took care of a lot of stuff on and off the floor, and all we really had to do was coach. Effort was never a problem, in practice or games.”

Although he’d never coached boys, Quattlebaum was used to them. He and his wife, Mickey, have two sons, Craig and Blake.

“I don’t know if I’ve always coached girls like boys, but it wasn’t that different,” he said. “I just think coaching’s coaching.

“I think it’s probably helped that I don’t have any girls, so I’ve always coached them like you would boys. So there wasn’t a lot of adjustment. The girls are a little more emotional. I didn’t have any guys crying after the game. Sometimes if you yell (at the girls) a little too hard, you’ll see some tears, but that doesn’t mean they don’t enjoy it and they aren’t dedicated.”

At first, there was a bit of uneasiness among the Lady Mustangs about sharing their coach.

“It kind of scared me,” said Gracie Frizzell, who signed with Ole Miss in November before seeing her high school career end with a knee injury in December. “I was wondering if he was going to leave us in the background, but he never did.

And the Lady Mustangs became the Mustangs’ biggest fans.

The dual schedule worked out. The Mustangs practiced before school, the Lady Mustangs afterward. Their games were generally on the same nights.

Quattlebaum said he expected both his teams to work hard in the off-season and be improved next season.

The boys will return five starters. The girls will return all but seniors Frizzell and Shelby Tankersley. Quattlebaum said both junior high squads would also send some help.

And if Frizzell is any indication, the Mustangs will follow their female counterparts in their dedication to their coach.

“I’ve played for Coach Q since eighth grade,” she said. “I respect Coach Q; he respects me and how hard I work, and I respect how hard he works as well, how he treats us and how he loves us.

“He’s taking care of us. On the court, he’ll chew me out, and I need it. It’s only going to make me better.