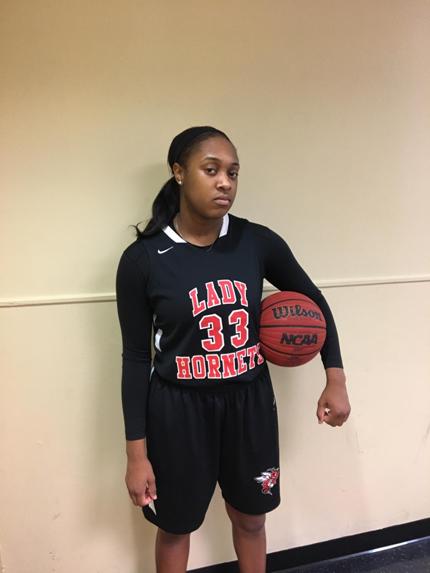 
For junior Jayla King and the Maumelle Lady Hornets, this basketball season was all about developing mental toughness. This was an especially difficult challenge for King, who tore her ACL in January 2016.


“I had surgery on April 5, and on Aug. 31, I passed my fitness test,” King said. “This cleared me to play basketball again. Through the season, I struggled mentally thinking that I was going to tear my ACL again. I wouldn’t drive the ball because I was afraid to get hurt again. At the free throw line, I would airball sometimes because I thought I wasn’t strong enough.


“Towards the end of the season, I improved at the free throw line, and I drove in more during the games. I learned that if it’s in God’s will for me to play basketball again, He’ll protect me.”


King was selected to this year’s 501 Basketball Team — 34 players representing the best the 501 has to offer both on and off the court. The team is sponsored by First Service Bank and First Security Bank. She was nominated by her head coach, William Rountree.


“Jayla is a good scorer and rebounder and an excellent team player,” Rountree wrote in his nomination. “She has high character, leads by great example and is extremely coachable. She has a willingness to sacrifice for the good of team. She’s a very conscientious student and high achiever.


“She started as a sophomore and was our leading rebounder and third leading scorer until she tore her ACL.”


Maumelle finished 4-20 this season. Despite the record, the Lady Hornets had some high moments on the court, and King is confident that the team learned and grew this season.


“Vilonia was a very competitive team,” King said. “When we played them, by halftime we were down 29-15. After an inspirational pep talk by our coach, we came back in the third quarter and outscored the Lady Eagles 15-5. Then in the fourth quarter, we outscored them again 9-5. I had two 3-pointers that quarter to tie the game.


“Although we lost in overtime, it was a great game and we played our hardest. We didn’t give up at halftime, and we gave ourselves a chance to win the game.”


Maumelle played a young team on the court, and all of this experience and playing time together could pay dividends in King’s senior season. And personally, King had a laundry list full of things she wanted to work on to improve her game.


“This season, I focused on moving my feet more on defense,” King said. “Offensively, I worked on being more aggressive when taking the ball to the goal, taking more outside shots, creating more open shot opportunities for my teammates, and overall being a better team player.”


The work this season paid off. King averaged 12.8 points and seven rebounds per game.


“My defining moment this season was when I scored my career high 24 points and 14 rebounds against Hall,” King said. “I realized that I could score in double digits and contribute to the team.”


Off the court, King is involved in Beta Club and National Honor Society.


“In 26 years as a head coach, I’ve never coached a player who cared more about doing her best than Jayla,” Rountree said.