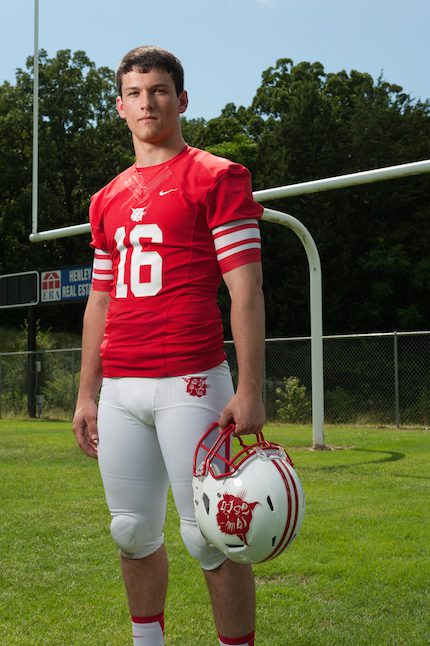 
Harding Academy enjoyed its sixth-consecutive 2-3A conference championship in 2014. As the team gears up for another run in the Class 3A playoffs, the excitement is high for the Wildcats.

“Our team trusts one another,” senior running back, linebacker and kicker Nate Dickson said. “Going into the playoffs, I feel like the team has a lot of confidence right now. Our coaches are always preparing, and I want to be the best leader I can be on the team. I want to make it as far as we can.”


Dickson was selected to this year’s 501 Football Team — 24 players representing all 11 counties of the 501. The team boasts the best the 501 has to offer both on and off the field. Dickson was nominated by Harding Academy’s head coach, Roddy Mote.


“Nate encourages others through the way he plays the game,” Mote said. “He plays every play as if no one is keeping score. He is extremely physical and plays with a very fast motor.”


Dickson isn’t your typical football athlete. A soccer player growing up, the senior never touched a football until he enrolled at Harding Academy during his freshman year.


“I came to Harding Academy in ninth grade after being homeschooled all my life,” Dickson said. “When I got here, football looked fun and I wanted to play. I had never touched a football in my life.”


The lack of football experience proved to be a challenge for Dickson. However, it was a trial that he soon learned he could overcome.


In just three years, Dickson has molded himself into a fearsome athlete on both sides of the football.


“I remember staying after practice every day, studying the white boards and trying to understand what was going on,” Dickson said. “Thankfully our coaches are really unselfish and spent a lot of time working with me. With the team’s encouragement, that gave me the confidence I needed and boosted my morale. Playing soccer helped me transition into a kicker. I started at outside linebacker in 10th grade, and now I love to play defense.”

“The example that Nate sets challenges others to follow him,” Mote said. “That’s what makes him a great teammate. He strives to be the best when it’s obvious he might not come out on top according to the world’s standards.”


Dickson has even made some special memories in the past three seasons — including a state championship win in 2012.


“I was so nervous in that game,” Dickson said. “With about a minute left, we were trailing to Glen Rose. I thought we’d have to go for a field goal. I had kicked a 50-yard field goal during pregame warm-ups, so I was pretty sure I could kick another, but I was still nervous. When our receiver, Kohl Blickenstaff, came out due to injury, we put in senior receiver Caleb Spears. He never played much, but when he came in, he stepped up big and reeled in the game-winning score. At Harding Academy, we’re confident in all of our players, not just our starters, and I think that goes a long way in being successful.”


Off the field, Dickson runs track, is a member of Beta Club and Circle of Excellence and enjoys science and chemistry.


“For the past four years, I’ve thought about pursuing pre-med after high school,” Dickson said. “I’ve always wanted to help people and that’s something I look forward to doing in the medical field one day.”


A member of the youth group at Covenant Fellowship Church of Christ in Searcy, Dickson has participated in mission trips and assisted in the relief effort in Vilonia after April’s devastating tornado.


“It looked like a warzone,” Dickson said. “The devastation was amazing. We took sunscreen and hand sanitizer to the workers there. Everyone was trying to help one another. I remember going out into a field and starting to pick up debris. We worked for so long and didn’t even make a dent in it.”


“Nate has a tremendous love for God,” Mote said. “He has tremendous work ethic and sets the bar for those around him. His actions reflect the words he speaks.”


Harding Academy plays host to Green Forest in the opening round of the Class 3A playoffs at 7 p.m. Friday.