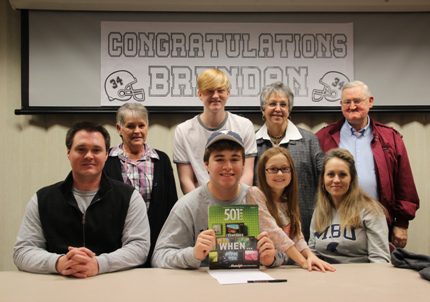 
Two years ago, Brendan Hale considered hanging up his cleats for good. Between constantly changing high schools and suffering injuries that often prevented him from playing the game he loved, the Vilonia senior saw little opportunity to achieve his dreams of playing football at the next level. Discouraged, Hale found inspiration in a unique place.


“Any time I was feeling down, my dad would always send me motivational quotes to pick me back up,” Hale said. “One of these quotes came from Derek Jeter, and it changed the way I viewed sports. Jeter said, ‘There may be people who have more talent than you, but there’s no excuse for anyone to work harder than you do.’ My dad never gave up on me, and I never would have gotten to where I am today without him.”


“When I was younger, I played both basketball and football,” Hale said. “My dad played basketball growing up and I wanted to follow in his footsteps. However, as I got into junior high, I woke up one day and my feet, my knees and the tops of my shins were killing me. When I went to a doctor, I learned that I had growth plates in my feet that would eventually hinder me from playing both sports full time. I had to choose — and I chose football.”


Suiting up for the junior high Eagles, Hale appeared to be set for a promising career at Vilonia. However, Hale’s luck quickly changed when a job opportunity forced his family to move away from the 501.


“In 10th grade, my family and I moved to Florida,” Hale said. “Though I missed my friends and teammates, I quickly made it onto the team at my new school. During my first game with my new team, I filled in for a starter who had gotten injured and I did well. In my second game, however, I suffered a concussion on a hard hit on the first play of the game. I stayed in the game and played through the injury, but I knew that something wasn’t right. When I went to see a doctor, I learned that the concussion would end my season shortly after it began.”


Game after game, Hale watched from the sidelines in disappointment as his team performed on the field.


“Sitting on the sidelines was annoying,” Hale said. “All my life, I have been battling various injuries, even when I was younger. Most of my earliest memories of the game were sitting out because I was hurt. It was easy for me to get discouraged, and I began to feel like I could never realistically play college football.”


When he and his family returned to the 501 the following summer, Hale struggled with the idea of playing football again.


“Going through what I’ve gone through, it was easy for me to be discouraged,” Hale said. “I felt like I was always getting injured and I couldn’t get the playing time in to show my skills. I decided that I didn’t want to do it anymore, but my family and friends weren’t ready to let me give up. Through their encouragement and inspiration, I gave it another shot and went back to playing football my junior year.”


Though he was back on the field in Vilonia, Hale’s injury woes soon returned, too. Just five games into the season, Hale suffered yet another season-ending injury.


“I’ll always remember that game,” Hale said. “It was the third quarter, and I spun off of a block to make a goal-line stop. During the play, I shattered my knuckle on a defender. Normally, a player only misses two or three weeks from an injury like that. However, because my knuckle was pointed downward, it had to be corrected or else I would never be able to move it again. Surgery was the only option for me and it cost me my season, yet again.”


This time, Hale says that the injury only fueled his will to succeed.


Achieving his goal would not be easy, however. The senior unexpectedly experienced ridicule from peers, classmates and even teammates.


“When I told others that I still dreamed of playing college football and that I was determined to make it happen, they laughed at me,” Hale said. “People often told me that I couldn’t do it. Though the things they said were discouraging, it pushed me to try even harder so that I could prove them all wrong.”


Determined to disprove his naysayers, Hale put extra emphasis on his training over the next seven months to get back into football shape.


“When it came to my physical shape, I knew that I was starting from nothing,” Hale said. “Four days a week, I started my day early — going to the gym before the sun came up so that I could work out and lift weights. I had a personal trainer that helped motivate me every step of the way. After working out, I would go straight to school and then work out and practice with the team afterward.”


“When a kid is hungry and a kid wants something, you can see it in his eyes,” said Larry Perrin, National Football Director for National Scouting Report. “When I first met Brendan, I saw that fire in his eyes. This young man was determined. He started this journey on his own prior to him meeting me. He totally transformed the way he looked. He had bought into changing his body physically. He had made up his mind that this was something that he wanted and gave it everything.”


Prior to his senior season, Hale yet again faced hardship with the death of his grandfather.


“In March 2015, my grandpa, Walter Hale, passed away,” Hale said. “He was a big influence on my life. He always told me that I would achieve great things one day. Although he didn’t get the chance to see what I’ve accomplished, I feel like I’ve done it for him.”


In addition to his own challenges, the Eagles faced a setback of their own.


“Two weeks before the season began, our coach left the school,” Hale said. “We had just days to learn a new offense before our preseason game, and it ultimately made the season that much harder for us as a team. However, while others were disappointed and frustrated, I saw our situation as an opportunity to step up and take responsibility. Each of us had parts to play, and I knew that in order for our team to be successful, I had to perform my role to the best of my ability.”


“As the season went on, I quickly had a handful of schools watching me,” Hale said. “As a blocking fullback who didn’t carry the ball much, it was nice to know that others were noticing and recognizing the work I was doing on the field. I went on to win all-conference honors last season, and it really meant a lot to me.”


In just one season, Hale had achieved what he once felt was impossible. In 2016, the senior happily put the official stamp on his future.


“On Feb. 3, 2016, I signed to play college football at Missouri Baptist University,” Hale said. “When I sit down and think about it, I know that I’ve achieved something big. At the same time, however, I’m not done yet. I have more work to do. Once I get to college, I have to show out and work hard in the offseason to get on the field as a freshman. There’s still a lot for me to do.”


Looking back on his journey, Hale stands tall, proud of his work ethic and determination.


“I never gave up,” Hale said. “I know that it’s cliché, but if you give anything your complete work ethic, you can achieve your goals. I know there are others out there with the odds stacked against them worse than me. I hope my story inspires them to never give up, too.”


“Good things happen to good people,” Perrin said. “This is a testament to setting your mind to something and achieving it. Brendan is going to be a very successful young man.”


In the future, Hale hopes to use his experience to guide others through their athletic endeavors.


“I’ve made up my mind — I want to be a football coach,” Hale said. “I want to be the coach that will give all of my players the opportunity to show their skills. I also want to motivate kids who may be in my position. Through my experience, I hope that my story might inspire one of my players.”