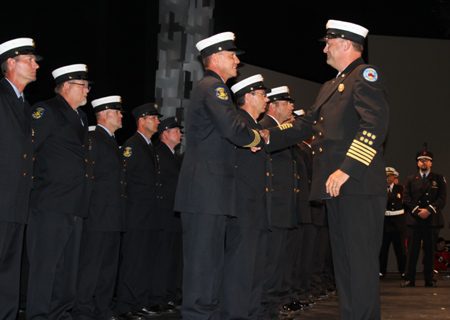 The ceremony was held July 8 at New Life Church.


Castleberry began working at the fire department in 1981. In 1990, he was promoted to fire marshal and in 1993 was named fire chief.


Townsell said he has always admired Bart Castleberry, not only as a great department head but as a great friend. “Bart Castleberry has been a great chief,” the mayor said. “Thank you. It’s a career well served and we, the citizens of Conway, have been his beneficiaries.”


Brewer described Castleberry as a “do right” leader. “He does the right things for the right reasons,” he said. “His concern was and always will be for the man on the ground.”


The ceremony featured two videos. The first was a tribute to the chief’s wife, Melissa, their sons – Sam, Tyler and Zach – and their family. Afterward, the chief asked his wife to dance on stage, fulfilling a promise he made years ago. The second video highlighted Castleberry’s service to the department.

During his comments, Castleberry told firefighters that change would be coming to the department but change was good. He said if he were younger, he would do it all over again. He also announced that Brian Moix had been appointed by the mayor as the interim fire chief. Moix – a 24-year veteran of the department – has served as division chief of training. He said he has no plans to seek the chief’s position.


The department presented Castleberry with a plaque bearing a firefighter’s ax. An American flag was also presented by the honor guard.


At the conclusion of the ceremony, uniformed members of the department assembled in rows on the stage for a final inspection conducted by Castleberry that included handshakes and hugs. The final firefighter was Castleberry’s son, Tyler, who is a member of the Maumelle Fire Department. When the inspection was complete, a dispatch operator conducted the last tone for the chief.


Next week, Castleberry will begin work as the code enforcement and permits officer for the city.