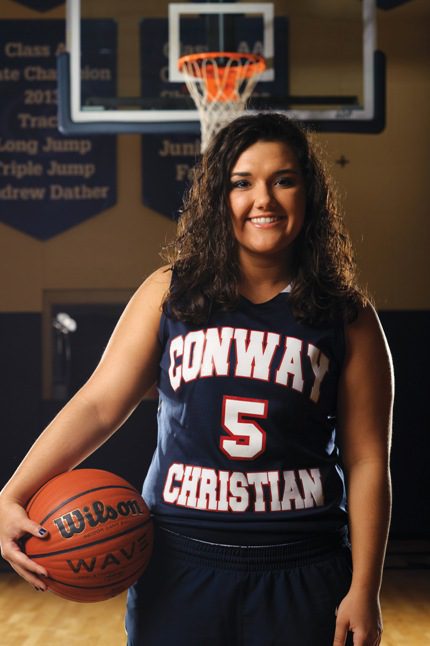 
For many players who suit up on the court, basketball is a way to have fun and a means to unwind. For Conway Christian senior point guard Carly Powell, basketball isn’t just a game — it’s in her blood.

“My entire family has played the game,” Powell said. “My mom and my aunt played at Southside, my uncle played for Guy-Perkins and my dad played for a school in north Arkansas. My mom, aunt and uncle went on to play college basketball for UCA. My brother played basketball in high school and now plays baseball for Lyon College. It was easy to follow in their footsteps. I knew it was just right for me.”


Powell was selected to this year’s 501 Basketball Team — 24 players representing the best the 501 has to offer both on and off the court. Powell was nominated by Conway Christian’s head coach, Jeremy Carson.


“Carly is a competitor, first and foremost,” Carson said. “She has also worked very hard on her leadership skills to become the floor leader that we need. She is going to key our defense, control pace and get the ball to our main scorers.”


In her senior year, Powell often reminisces to one of her favorite moments — winning the district championship in ninth grade.


“It was the highlight of my career,” Powell said. “We played against St. Joseph — one of our biggest rivals. It took a lot of hard work, but we won the game on defense, and winning that game showed all the hard work that we had put in over the year.”


Powell and the Lady Eagles will add a new chapter to the rivalry this week as Conway Christian travels to St. Joseph on Friday.


“Any time we play St. Joseph, it’s a big game,” Powell said. “We have some big girls and we’re really focusing on defense this year. If we focus on pounding the ball inside, we’ll be successful.”


“Carly just wants to win,” Carson said. “She understands that it takes all of her teammates and her to give their very best effort in order to do that. She holds those around her accountable and motivates her teammates.”


“We have four seniors who have played together since the fifth grade,” Powell said. “Everyone’s goal is to try to make it all the way this year. I think that, together, we can make a really good run in the state tournament. We have a good chance to go far.”


“My goal this season is to make all-conference,” Powell said. “It would be a big deal for me. I’m not really a scoring player, but an all-state selection would be nice, too. I’m more of a defensive leader on the team. Taking care of the ball is important to me.”


Off the court, Powell is active in Beta Club, Drama Club and History Club and maintains a 3.9 GPA, in addition to playing softball and track and field. After high school, Powell plans to attend college and pursue a career as a nurse practitioner.


“The Bible says, ‘Everything you do, do as unto the Lord,’” Carson said. “Carly applies this to her schoolwork and her many friendships. All of her teachers describe her as a model student.”


In the community, Powell is a member of the youth group and choir at Southside Baptist Church in Bee Branch and has participated in the CCS Outreach program, doing monthly mission work in the Conway community.


“Carly’s best off-court quality is that she lives out her faith,” Carson said. “I can see the light of Christ shine through her in all that she does and in how she interacts with those around her.”