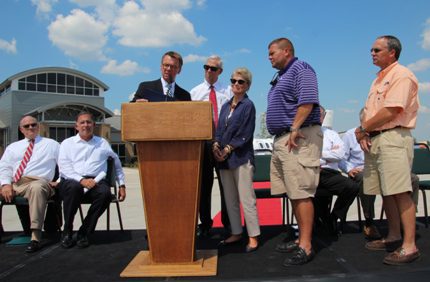 
While the city of Conway boasts a new airport, it bears a familiar name and honors a family long associated with aviation.

At the Sept. 5 dedication ceremony, Mayor Tab Townsell read a proclamation transferring the name Dennis F. Cantrell Field from the airport located in the central area of the city to the new facility at 3240 Sand Gap Road in West Conway along the Arkansas River.


Cantrell’s involvement with the city airport dates to the early 1930s. From 1946 until he retired in 1986, he was the general manager of the municipal airport. In September 1978, the name Conway Municipal Airport was changed to Cantrell Field in honor of Cantrell.


“Mr. Cantrell through unflagging efforts not only maintained Conway’s Municipal Airport but grew and modernized the airport from a single sodded runway to a modern airport with two lighted, hard surface runways serviced by modern radio navigational equipment and hangar facilities,” Townsell read from the proclamation, which also cited the city’s “all due thankfulness for his accomplishments toward the advancement of aviation in Conway and for advancing the city itself along with those achievements and in honored recognition of the long transformational years he served Conway piloting a developing industry in a developing city.”


The mayor, citing the full support of the city council, added that, "even as the Conway Municipal Airport has relocated, its official name has relocated as well. The new airport will be hereafter known as the Dennis F. Cantrell Field.”


“Mr. Cantrell, even though you have long gone on to “touch the face of God” as the poet described in High Flight, let those peoples here today bear witness to this new, proud facility and let them know that you were right all along, that this new airport, this new Dennis F. Cantrell Field, is indeed the face of Conway to much of the business and corporate community and it is a major component of our collective face forward to future prosperity. Mr. Cantrell, today we all say aviation is economic development.”


Dennis and Marjory Cantrell’s daughter, Pat Cantrell Otto, and their grandsons, pilots William and Bryant, were on hand for the airport dedication and were presented with a copy of the proclamation.


“My grandfather was all about aviation,” William Otto told those in attendance. “This is a world class facility and we thank you for naming it for our grandfather.”


The dedication drew an estimated 200 and featured tours of the new terminal and multiple landings from area aircrafts, including the arrival by jet of elected officials and others key to the airport project who spoke during the dedication. They included Sen. Mark Pryor, Sen. John Boozman, Congressman Tim Griffin, the mayor and Bill Hegeman, past president of the Conway Development Corporation and chairman of the Conway Airport Advisory Committee.


During the ceremony, City of Conway Chief of Staff Jack Bell recognized key individuals and groups that helped with the airport project, including CDC and FAA representatives, Garver Engineers, architects Rik Sowell and Joanna Nabholz, Corco Construction and Weaver-Bailey Contractors. He also recognized interior designer Georg Andersen, who created the design for the terminal interior and tweaked the plan for the exterior. “He’s done a beautiful job.”


“We are so fortunate we’ve had our senators and representatives and their staffs who have worked closely with city officials and the FAA to see that funding was available as we needed on this project,” said Hegeman. “Without their help we probably wouldn’t be standing here today.”


Pryor said he became involved in the project – “a labor of love” – about six years ago. “Thank you for all the work that went into getting us here today,” he said. “Today not only do we celebrate the opening of this facility and this runway and all the great things happening here, but we really celebrate the future of this thriving city. Conway and Faulkner County have so many great things going for it.”


Pryor said the airport will help make Conway’s educational institutions, businesses and factories more accessible. “Best of all, this is an illustration to me of what happens when you work together to get things done,” he said.


The senator recognized local leadership in explaining that the airport is ahead of schedule and the cost was less than originally expected. He also explained that the area’s growth and potential were the reasons for the involvement of so many in the project. “There are good things happening here.”


Griffin said, “If there was ever an infrastructure project that speaks for itself, this is it.” He said it doesn’t take a lot of analysis to understand the effect the new airport will have. “The impact of this is going to be so much greater than the sum of its parts.”


Townsell described the airport as a difficult project. “It’s been long.  It’s been drawn out. It’s required shepherding the entire time,” he said, thanking the congressional delegation and others for their help. Ninety percent of the project was funded by the federal government, with another 5 percent in state funds, he said.


According to Bell, the new airport had been in the works for more than 20 years. “It’s very important from several perspectives,” he said, citing safety concerns with the previous location and the potential for economic development. “It will allow larger corporate jets to come in and hopefully attract industry and accommodate current industry.”


Bell also described a city’s airport at the “front door” to the community. “I think people are going to be impressed,” he said. “It is first class.”


(See more photos from this event in the October issue of 501 LIFE.)