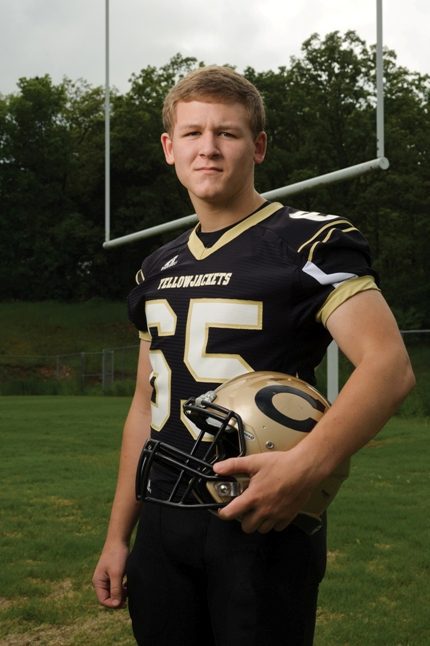 
Don’t let their record fool you — although the Clinton Yellowjackets (1-6, 0-4) are still searching for their first conference victory in 2015, the team refuses to go down without a fight. With three weeks remaining in Class 4-4A conference play, senior linebacker Trevor Dawson says the team still has some venom left in their veins.


“We’re a lot different than last year,” Dawson said. “We lost 12 starters from last year’s team, and although we have new faces this year, we also have a lot of skill that we’re developing. Our junior class is very talented. This year, my goal is to keep the morale of the team up. I want to stand tall, be a positive voice for them and help them step up and achieve their full potential.”


Dawson was selected to this year’s 501 Football Team — 27 players representing all 11 counties of the 501. The team boasts the best the 501 has to offer both on and off the field.


“Trevor has a motor that never stops,” Dufrene wrote in his nomination. “He plays hard every play, works hard in every drill and always encourages his teammates.”


Though the team’s record appears daunting, the adversity is nothing that Dawson hasn’t faced before.


“I’ve dealt with knee problems for most of my high school career,” Dawson said. “In ninth grade, I sprained my MCL badly. Less than a year later, I tore my ACL against Mariana and missed the remainder of my sophomore season and nearly the first half of my junior year. I tried to play through the pain, but sometimes your body lets you know that it’s just not going to work.”


One of Dawson’s favorite football memories comes from his junior campaign, where his Yellowjackets downed then top-ranked Pine Bluff Dollarway in the Class 4A playoffs, 21-20.


“It was probably our biggest win in school history,” Dawson said. “That week, it snowed and we missed two days of practice. Some kids couldn’t even get to school. Those who could make it to the school practiced at odd hours. Going into that game, we weren’t sure if we got enough practice time in to beat those guys. During the game, we gave it everything we had and we ended up pulling off a successful trick play for a score to seal the deal in the second half. It was amazing.”


Off the field, Dawson is active in Future Farmers of America, Fellowship of Christian Athletes and Clinton’s trapshooting program. The senior also volunteers for Teens Having United Goals, whose mission is to reduce substance abuse and other risky behaviors among Van Buren County youth.


“We do a lot with the younger kids in the community,” Dawson said. “We go talk to them at lunch. Sometimes we dress up. We try to make a positive impact in their lives.”


After high school, Dawson plans to pursue an Aviation Business degree at Henderson State University and hopes to eventually take over the family business — Dawson Aircraft.
“I’m a pilot in my free time,” Dawson said. “My dad salvages wrecked planes for a living. He either fixes them up or sells them for parts. He’s flown for around 20 years, and he’s taught me a lot about the business. Not many kids my age can tell you what they want to do when they grow up, but I’m excited about my future.”


Dawson and the Yellowjackets travel to Baptist Prep at 7 p.m. Friday.