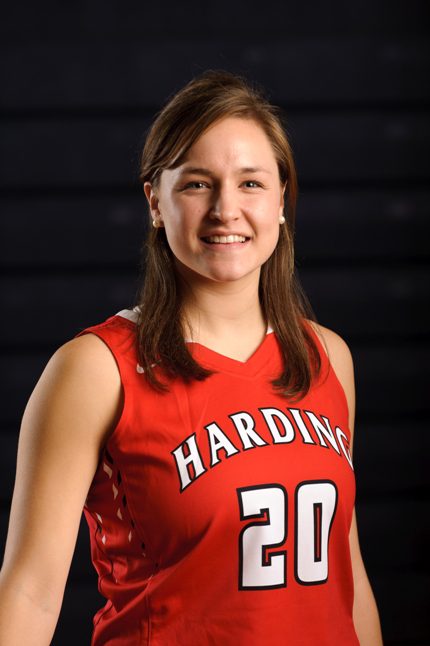 22 Dec Davis strives to 'succeed in all things'


For Harding Academy’s Ally Davis, basketball is much more than just a game — it’s a gift.


“Being able to play basketball is an opportunity that God has given me, and I want to strive to use the gifts He has given me to be the best player and teammate that I can be and to be His light throughout the journey,” Davis said. “God has really blessed me. My main challenge is humbling myself enough to fully acknowledge that everything that I am and all that I have been given comes from God.”


Davis, a senior forward for Harding Academy, was selected to this year’s 501 Basketball Team — 35 players representing the best the 501 has to offer both on and off the court. Davis was nominated by her head coach, Rusty Garner.


“Ally is highly intelligent,” Garner wrote in his nomination. “She is a great teammate. She is physical. She is mentally and physical tough. She is as coachable a young lady as I’ve ever had. You never have to tell her something twice.


“Ally is a gifted, yet humble servant in her life. She is the type of friend and teammate that everyone wants near them.”


As of press time, Davis and the Lady Wildcats are off to a 6-3 record. Davis and her team made it all the way to the 3A championship game when she was a sophomore, and the team is focused on and working for a return trip this season.


“That whole road to state was super fun,” Davis said. “Post-season is great for many reasons, but one reason is that you get to spend a lot of time with your team, and I have been blessed with being a part of teams full of great girls who I love beyond the basketball court, so I cherish all the extra time that I get to spend with them.


“There is something special about going as far as you can go and maxing out your basketball season. We didn’t win the big game, but we sure did have a lot of fun getting there and experiencing that unique opportunity together.”


To get back to the big game, Davis and the Lady Wildcats are placing their focus on getting better day in and day out.


“Coach Garner always tells us that he hopes that we will continue to learn and grow and get better each game so that we will be playing our best basketball at the end of February and the beginning of March,” Davis said. “Obviously, we hope that includes as long as a season as we can have, but our goal is to continuously improve individually and as a team.


“I have a fear of messing up, so I have had to learn to play with a bit of confidence and realize the newness of each play. You could have just air-balled a wide open shot, but you can’t let that affect how you play defense or your next shot; you have to shake it off. That is easier to do when you have great teammates that are there to encourage you, and I definitely have been blessed with those.”


For Coach Garner, Davis fills a vital leadership role on and off the court.


“Her encouraging, selfless nature makes her a great teammate,” Garner said. “She is driven by team and teammate success. Her desire to succeed in all things is infectious, be it in the classroom, on the court or in the community. Ally is our team captain and is our voice on the floor. She is also the student body president and is a leader in our school.”


Davis also participates in track and field at Harding Academy. She is a member of the Student Association, Youth Advisory Council, the chorus and FBLA. She is also a National Merit Finalist. Outside of school, Davis is involved in the youth group at the Downtown Church of Christ, where her family attends.


It’s still early in the season for the Lady Cats, and the team is still finding its identity as it gets ready for 2-3A conference play.


“One of our defining moments of the season has been our win against Sacred Heart,” Davis said. “We gave up two substantial leads, but our girls showed a lot of character, as Coach put it, and battled back to take the lead and secure it for the win despite a lot of mistakes on our part.”


Davis and the Lady Wildcats return to the court after Christmas to take on Searcy on Monday, Dec. 28, in the Beebe Holiday Classic.