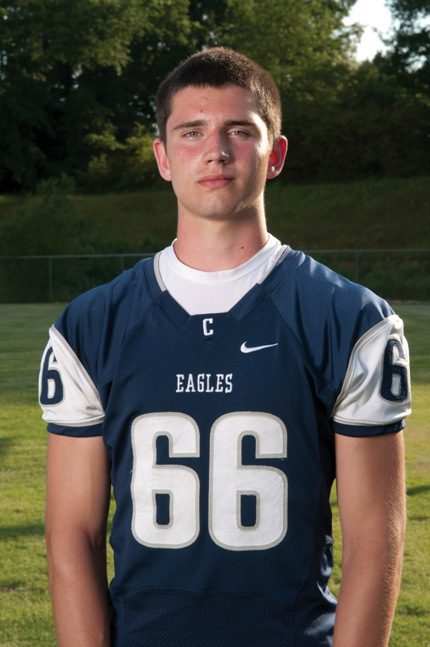 
The name Dather has been striking fear into Conway Christian opponents for the last several years as brothers Andrew and Caleb have dominated on opposites sides of the field for the Eagles.

Andrew was an all-state receiver for the Eagles and now plays at Harding University. Caleb is the little brother in name only. The 6-foot-5 defensive end has led the team in spirit and in play this fall.


“Caleb Dather is a very dominating force for the Eagles on the defensive line,” said John David Smith, play-by-play announcer for the Eagles on conwaychristiansports.com.  “Against Cedarville he was well into double digits in solo tackles. He had 12 tackles against Poyen and all of that while he was fighting a stomach virus. He is absolutely the leader on the defense.”

Dather was nominated by his coach, Michael Carter, and selected for this year’s 501 Football Team. It’s hard to imagine that an athlete so physically gifted for the game took some major convincing to play.


“When I was younger, I didn’t actually like football,” Dather said. “But then my dad bribed me into it, and I developed a love for the sport. He bribed me with a PlayStation 2.”

Last fall, the Eagles posted their best record since moving to AAA football in 2008. Even better, the school notched its first playoff win with a 40-32 victory over McCrory in the first round of the playoffs.


“It was a big accomplishment for our school,” Dather said of the playoff win. “It was a pretty overwhelming feeling making that accomplishment with my teammates. This year we want to win conference, make it to the playoffs again and do as well as we can.”


The Eagles’ hope of winning the 5-2A took somewhat of a hit last week as the Eagles fell to Mount Ida. But there’s a lot of football left to play for Conway Christian, including matchups with Bigelow (2-1 in conference) and Magnet Cove and Cutter Morning Star (both 3-0 in conference).


Conway Christian and Magnet Cove collided in Week 9 last fall, both with perfect conference records. The Eagles held an 11-point lead in the third quarter, but the Panthers proved too resilient, overcoming two deficits late in the game to take the win, 43-39. An equally devastating loss followed the next week, 41-38, to Bigelow.


“This year, we have to never get our heads down when a play goes wrong. We just need to make the best of every situation we get. Personally, I’m working on becoming more confident in myself, knowing my potential, overcoming my own boundaries I set for myself and becoming better.”


The Eagles (2-4, 2-1) take on Quitman this week. The Bulldogs are looking for their first conference victory on the year.


“We started this rivalry game with Quitman two years ago where we get this trophy,” Dather said. “The first year we had the game in the bag and then just crashed. It was crazy. We were pumped up to beat them last season. We’re ready for another crazy game this year.”

While Dather’s performance on the field is paramount for the Eagles, his contributions off the field are as equally important, which is why he was nominated for the 501 Football Team.

“His character is displayed to all who watch,” Carter said in his nomination. “He’s a servant-leader.”


Dather has a special relationship with the game of football. He’s poured much of himself into the game, but it hasn’t been just a one-way relationship.


“I love the school that I go to,” Dather said. “I was homeschooled through sixth grade. It’s a smaller community. Everyone knows everyone. It’s a real one-on-one feel with the teachers. It was scary at first. I wasn’t very social. It took a while to adjust to it. I’ve really ended up loving it. Football has helped.”