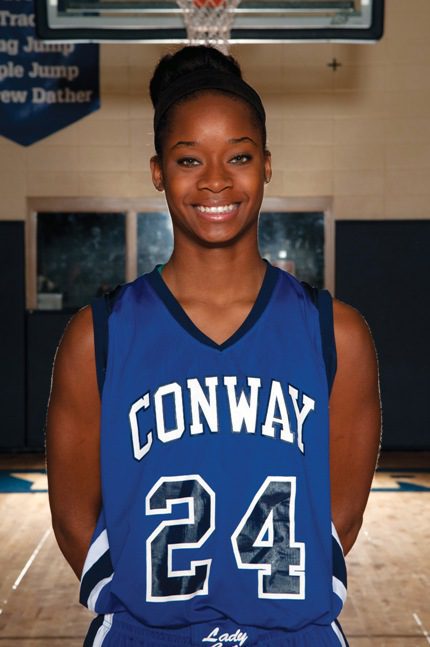 
Conway junior Jordan Danberry knows what it takes to be successful.

From being a member of Conway White’s impressive 43-game winning streak from 2009-12 to defeating the top-ranked team in Georgia with her AAU team, the Arkansas Mavericks, a year ago, the 5-foot-7 point guard has experienced success on many levels throughout her basketball career.


The next goal on her list: bring a state championship home to Conway.


Danberry was nominated and selected to the inaugural 501 Basketball Team, which is made up of male and female student-athletes honored for their on- and off-the-court accomplishments and contributions. She was nominated by her coach, Ashley Nance.


“Jordan is a natural leader,” Nance said. “Her teammates look up to her to lead them and be an example by her actions.”


Basketball comes naturally for Danberry, whose family has spent quite a bit of time on the court for Conway over the years.


With the conference season nearing its end, Danberry and the Lady Cats (13-7, 4-3 7A/6A Central) have been working hard at practice to prepare for the upcoming state tournament.


“We have a good chance to win state this year,” Danberry said. “That’s been our main goal all year. Personally, I’ve mainly been working on my pull-up jump shot and my perimeter shooting, and trying to better my assist-to-turnover ratio.”


“Jordan brings energy to practice and games, and she also cares about what her teammates are going through off the court,” Nance said.


With just one game remaining in conference play, Danberry and the Lady Cats will travel to Greenwood on Friday, Feb. 28, and attempt to avenge a 58-54 loss to the Lady Bulldogs in January. The game will be critical in the Lady Cats’ state tournament seeding.


“I’m really looking forward to playing against Greenwood,” Danberry said. “It’s a big rivalry game, and the whole crowd is into it. Both teams are really going at it because they’re both great teams.”


Just a junior, Danberry is currently ranked by ESPN HoopGurlz as one of the nation’s top 50 players.


“Jordan is a strong, athletic point guard that sees the floor well and is able to get to the basket,” Nance said. “She is great at getting her teammates open and distributing the basketball.”


Off the court, Danberry is involved with G.E.M.S., a program that encourages youth to make healthy choices and provides tools for change for youth and families.


“G.E.M.S. is about young women trying to achieve goals in their lives and trying to become a better person and being successful,” Danberry said.


“Jordan has volunteered at youth basketball camps,” Nance said. “She has volunteered for Community Connections, helping with the art program for children with special needs. Jordan has also volunteered her time to read to the Theodore Jones Elementary School classes.”


Danberry attends church at Zion Temple Church of God and Christ and enjoys hanging out with her friends. After high school, she plans to further her education in pursuit of a degree in criminal justice and has received offers to play basketball for many schools, including Ole Miss, Texas Tech, UALR, TCU and the University of Arkansas.

“Jordan is very intelligent,” Nance said. “She makes good grades and understands the importance of her academics in her future. She is a great example of a student-athlete.”