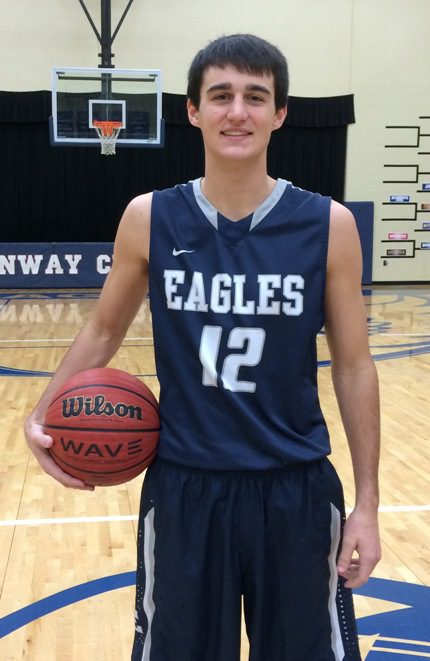 
From learning the basics in Upward Basketball to suiting up for the senior high Eagles, Conway Christian senior point guard Luke Beckman has enjoyed his share of memories on the basketball court over the years. Two of his favorites include plays that have helped him become a clutch player for the Eagles.

“I’ve hit two buzzer beaters during my career,” Beckman said. “The first was against Clinton to send the game to overtime, and we ended up winning the game. Last year, I hit the game-winning shot against Bigelow. It was really cool. We faced off against them in track and field later that year and they still remembered me as the guy who hit that shot.”


With a new coach and Beckman’s senior season under way, the Eagles have experienced a few challenges to begin the year.


“Having a new coach this year has been different for us,” Beckman said. “He uses a different philosophy than what we are used to, but he’s coaching his heart out and he’s trying to help us succeed not only on the court, but in life as well. We’ve been in every game we’ve played in, and we’ve kept some games close, but we haven’t been able to put four quarters together yet. We are trying to put a whole game together and not just play part of one. Defense is a big thing for us, and we’re working harder to not give up as many points.”


Beckman was selected to this year’s 501 Basketball Team — 24 players representing the best the 501 has to offer both on and off the court. Beckman was nominated by Conway Christian’s head coach, Austin Mitchell.


“Luke is a great athlete and pure shooter,” Mitchell said. “He leads his team on the court by example and through his work ethic. He is a competitor and will do whatever it takes to win. He always finds a way to make everyone around him better.”


This week, Beckman and the Eagles face a tough test — taking on cross-town rival St. Joseph.


“It’s the biggest game of the year for us,” Beckman said. “Playing against St. Joseph is always a fun game, especially because I know most of their players. We’ve grown up playing against each other. The fans come out — not just for the teams, but for the community. A lot of different people like to come to watch the cross-town rivalry. However, I can’t remember us ever beating them.”


According to Beckman, the key to beating the Bulldogs lies in the team’s defense.


“If they can’t score, they can’t win,” Beckman said. “Defense is big for us, and we will be playing at our own pace and trying to not rush things in order to keep the game under control and not let it get away.”


As the Eagles prepare to enter the heart of their schedule, Beckman believes the team is capable of anything.


“It would be really nice to win our conference,” Beckman said. “If we could make it to state, that would be fun, too. Honestly I think we could go as far as we want. The harder we work the farther we’ll go.”


Off the court, Beckman enjoyed conference championships this year with Conway Christian’s golf and tennis programs and is also involved with Drama Club and Fellowship of Christian Athletes.

“Luke takes pride in his academics and is always finding ways to advance his education,” Mitchell said. “As a senior, he leads by example on and off the court. He strives to be like Christ in all that he does.”


An avid outdoorsman, Beckman often enjoys the beauty and nature of the 501.


“I love the outdoors,” Beckman said. “Hunting, hiking, camping — there’s so much to do here and it’s all right in your own backyard. Duck season is my favorite. It’s tough playing basketball during duck season because I want to be hunting every morning.”


When he needs time to unwind from academics and athletics, the multi-talented Beckman spends time with friends engaging in a unique hobby — table tennis.


“A few years ago, one of my friends got a table tennis table, and we’d play all the time,” Beckman said. “Over Christmas break, we had a group of friends over, and we played for hours. We’ve learned how to play doubles, and it’s very challenging. It’s a lot of fun and a nice release from school.”