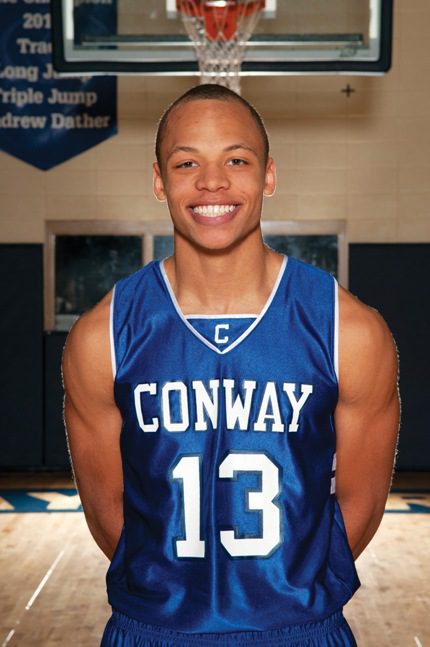 “I’ve been playing basketball as long as I can remember really,” Criswell said. “It officially started in Upward basketball in first grade, and then I started playing competitively in fifth or sixth grade. I actually played with Logan Horvath, Drew Bottoms and Drake Cooper; we played on the same summer team for two or three years. I played with Drew and Logan for four or five years total.”


Criswell, Horvath (Greenbrier), Bottoms (Sacred Heart) and Cooper (St. Joseph) are all part of the inaugural 501 Basketball Team — which is made up of male and female student-athletes honored for their on- and off-the-court accomplishments and contributions. Conway Head Coach James Bates nominated Criswell.


“Sean is the team’s strongest player pound for pound,” Bates said. “He is an extremely hard worker. He always puts the team first and has become a leader like seniors are supposed to do.


“Sean started at the post last season, even though he was not as tall as the player he was often asked to guard. His ability to move to the forward spot this season should help him be more productive.”


Criswell and the Wampus Cats are hovering near a .500 record in conference play and are focused on making a push up the 7A Central standings as the playoffs near.


“I just want to win as many games as possible,” Criswell said. “It would help if I wanted to score a little bit more, but really that’s not what it’s about. It’s about doing whatever it takes to win. I just want to get all the way through the state tournament. That’s been my dream.


“Win, win, win. It was a heartbreaker to lose in the first round to Van Buren last year. It’s still in our hearts. We want to show that we are willing and able to go all the way.”


On the court, Criswell’s No. 1 weapon that he carries for the Wampus Cats is his uncontainable energy.


“I know that I am going to get every ounce of energy at all times from Sean, and as a coach you cannot expect anything more than that,” Bates said. “Sean is the kind of player that a coach likes in that he competes at a high energy level, which sets a good example for the younger players in your program. When he has success on the court, the younger guys see how hard he works to achieve that success.”


For Criswell, the energy is all about influence.


“I try to bring as much energy as I can to the team. I like to hustle. I like to play hard. I communicate a lot with my teammates on defense. If we miss an assignment, I don’t yell about it. I just say, ‘Go and get the next one.’ I just try to provide a positive influence to them.”


Off the court, Criswell is an ardent musician, playing guitar and viola.


“I’ve played viola in the orchestra since sixth grade,” Criswell said. “I qualified for all-state the two past years. I made all-region four times. I’m going to miss it. It was really fun.


“I’m really looking forward to pursuing it in college. I really want to keep playing my viola. I’m not part of the stereotype of a violinist. I also like the look on people’s faces when they say, ‘You play in the orchestra?’ It doesn’t seem like people expect that from me.”


Criswell has lived in Conway his whole life and appreciates the sense of safety the 501 provides.


“It’s the southern hospitality really,” Criswell said. “I remember going up to some basketball camps up north, and the people up there were not nice. I just love how everyone is so nice here. It’s a taste of both the real world, and yet, you’re kind of safe, in a sense.”