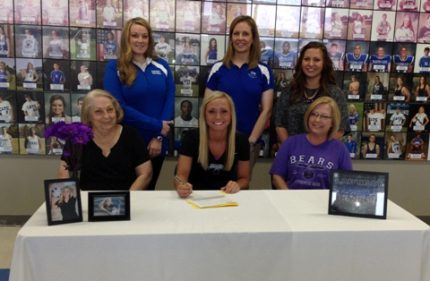 Over the last three years, Rachel has accumulated a 72-15 overall record, 38-4 conference record and two conference championships, with three trips to the 7A State Final Four. She was named All State in 2013, All State Tournament Team 2013 and All Conference in 2012 and 2013.


Over her career at Conway High School, Rachel ranks third in overall season digs with 529 and was the team leader in 2013. She ranks fifth in overall digs with 795 and ninth in season aces in 2012 with a total of 55.


“I am thankful for everyone who has impacted me on and off the court,” Rachel said. “I am truly blessed to have such a supportive family, friends, coaches and teammates. I’m honored to have the opportunity to play with the UCA Sugar Bears and work with their coaching staff. They have a very successful program and I look forward to being a part of it.


“Volleyball has been a huge part of my life and I am excited to keep playing the sport I love at UCA.”


Conway High Volleyball Coach Laura Crow had high praise for Rachel. “We are extremely proud that Rachel was given the opportunity to continue playing at the next level,” she said. “She was a tremendous athlete and leader for our team at Conway.  We are proud of all the records she set. We are looking forward to watching her play and keeping up with her at UCA.”