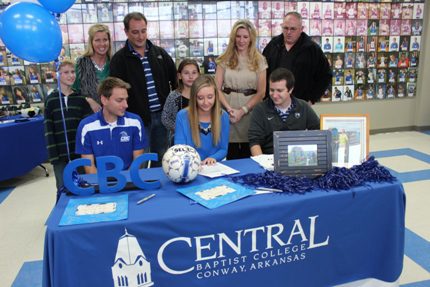 “Peyton has been a leader in every team she’s been on,” said Conway High School Soccer Coach Kevin DeStefano, adding that she is also an exemplary student athlete. “She’s going to make a great Mustang.”


Peyton was joined at the signing ceremony at Buzz Bolding Arena by members of the school’s boys and girls soccer teams as well as family and friends. CBC coach Philip Bohn also attended.


Peyton – a daughter of Traci and Tommy Balentine and Ray and Jennifer Turner – plans to study kinesiology and is considering physical therapy as a career path. A soccer player since she was 6, Peyton has played club ball in Greenbrier and with the Rush program in Conway.


“Today I start a new chapter,” she said, adding that she considered other schools but decided to stay close to home. As DeStefano pointed out, her decision to attend CBC will give family and friends in Conway an opportunity to continue to watch her play.