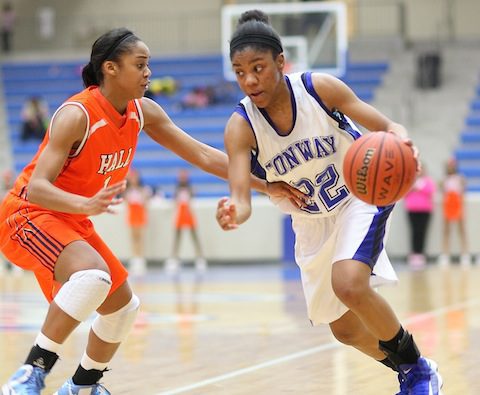 At 12-4 (1-2 7-A Central), the Conway Lady Wampus Cats are off to a great start this season. Averaging 26 points per game, one major key to the team’s success is senior guard Enjonae Chambers.

“Enjonae is one of the best shooters in the state,” Lady Cats Coach Ashley Nance said. “One of her best qualities on the court is her effort and enthusiasm. I never question her effort on the court and she always gives one-hundred percent in games and in practice. She is the ideal senior leader for our basketball team.”

A three-year letterman and a two-time all-conference and all-state tournament player, Chambers has also been selected twice by the Little Rock Chamber Downtown Tip-Off Club as an outstanding player. In 2013, she looks to add even more to her impressive resume.

“As a team, we’d like to be in the state finals and win a state championship ring,” Chambers said.

Although her abilities on the court are valuable to the team, Chambers’ leadership skills are where the senior really shines.

“Enjonae holds her teammates accountable off the court, during practice and in the game,” Nance said. “She has developed into a vocal leader over the past year but has always been a leader by example. I expect her to be an extension of me on and off the floor.”

Not only does she experience success on the basketball court, but Chambers excels in the classroom and her community as well.

“Enjonae takes her work ethic on the basketball court and also applies that in the classroom,” Nance said. “She wants to make her teachers proud and they love to be around her.


“She has willingly worked youth basketball camps for the past three years. She also has volunteered for community connections, which gives kids with special needs the opportunity to participate in extracurricular activities.”

In her final season with the Lady Cats, Chambers cherishes each time she steps on the court with her team.

“Every day is a memorable day with the team,” Chambers said. “I just enjoy being with my teammates and winning games.”

After this season, Chambers plans to further her basketball career, following in the footsteps of her favorite basketball player, Candace Parker.

“I’m a big fan of the Los Angeles Sparks,” Chambers said. “Candace Parker has been my favorite basketball player since she was in college [at Tennessee].”

“Enjonae is a very fun-loving lady,” Nance said. “Everyone loves to be around her and her enthusiasm for life is contagious.”