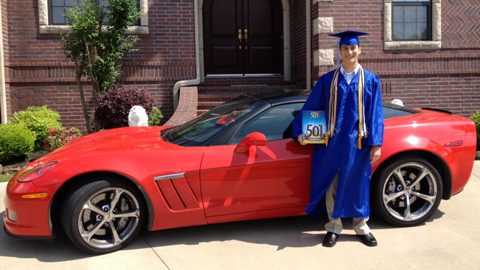 
Disappointment, with the wrong spirit, can be destructive. But with the right spirit, disappointment can breed boundless heights of success.

Conway senior swimmer William Bryden has the right spirit and is continuing to soar into the next phase of his life.


“His greatest strength is his determination and fortitude,” said Christie Rye, Conway High swim coach. “He sets a goal and works hard until he achieves it. He passes this same determination to other swimmers. This also goes into the classroom.”


Success in the pool didn’t come easily for Bryden. He earned it.


“When I was 11 years old, my only goal was to get my first Zone cut so that I could represent Arkansas at the Central Zone Championships,” Bryden said. “Unfortunately, no matter how hard I tried, I failed to achieve my goal. To make matters worse, my friends had achieved the goal that I had set for myself. I was happy for them, but pained because I would not be able to join them at the Zone Championships. I made a vow right then that I would do whatever it took to achieve my goal.


“The next season, I made 99 percent of the practices, including the early mornings from 5:30-7 before school. At the 2008 Arkansas State championships, I not only received my zone cut, but I won highpoint and was the 11-12-year-old Arkansas State Champion. Through this, I learned that dedication, hard work and perseverance through even the most discouraging of trials are the keys to success.”


Bryden will graduate from Conway High on Sunday, May 18, and will take a laundry list of accomplishments, both in and out of the pool, with him when he walks across the stage to receive his diploma:


“I have been swimming on the Aquakids swim team since I was 8 years old, for 10 years now, and swam all four years of high school for the CHS swim team,” Bryden said. “Outside of the pool, I have tried my best to become a leader within my community as a model for other student athletes to follow. I’m not perfect in any way, shape, or form . . . I’ve had problems with my temper. Swimming has helped me by being an outlet for my daily frustrations. With swimming, I am able to turn my frustrations into energy to help better myself in the pool.”


“I’m obsessed with Iron Man and write articles about the technology of his suit for The Wannabe Scientist, a website that takes complex topics and explains them in layman’s terms,” Bryden said. “I am a thrill seeker and adventure lover. I love to go scuba diving, sky diving, flying and driving in the country. I also enjoy reading and researching complex scientific concepts.”


William, the son of Misuk and Scott Bryden, is the Conway High School Class of 2014 valedictorian. He received a scholarship to attend Johns Hopkins University in Baltimore, Md., in August and will be swimming for the JHU Blue Jay’s swim team. He will be double majoring in neuroscience and computer science and plans to attend Johns Hopkins Medical School to become a neurosurgeon.


William will graduate with more than a 4.5 GPA and has taken 16 AP courses during his four years at CHS. He recently attended the Governor’s Scholars Day at the Governor’s Mansion in Little Rock, where he met Gov. and Mrs. Mike Beebe. In addition to his JHU scholarship, he was also recently awarded two additional scholarships — the Fellowship of Christian Athlete’s Cliff Garrison scholarship for $1,000 and the CHS Scholar Athlete award for $500. He was recently honored as the March Teen of the Month by the Conway Optimist Club and was also recently presented his 4-year letterman award by coach Rye.


“I will miss Conway and all my friends when I leave for Hopkins in three months, but right now I am enjoying this exciting time and I look forward to the change and what God has planned for me in my future,” Bryden said. “Through my
travels, I’ve learned that there is only one place that truly feels like home. Not only do I have family and life-long friends here, but I have a sense of peace and belonging that just doesn’t exist anywhere else in the world. Here in the 501, there is so much opportunity for adventure that one can never be bored!”