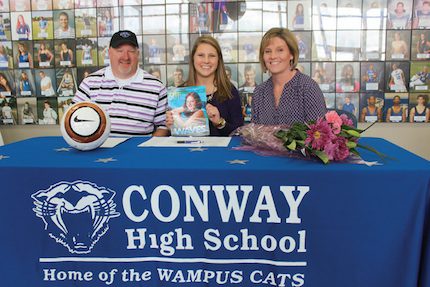 Conway High School senior Avery Taylor will be continuing her soccer career close to home at the University of Central Arkansas.

In front of family, friends, teammates and classmates, Taylor recently signed a letter of intent to play for UCA during a ceremony at Buzz Bolding Arena at CHS.


Conway High girls soccer coach Kevin DeStefano had high praise for Taylor, who began playing at the age of 5. She played for Conway United Soccer, which later became Arkansas Rush, and has played competitive soccer since she was 10. She also officiated soccer for four years.


“Avery was lucky enough to have one of the best soccer coaches I know, Matt Mittelstaedt,” said DeStefano. “He helped show her that she had the capabilities to achieve the goal she is achieving today, to play collegiate soccer.”


Taylor played two years of varsity soccer, which would have been three but she was invited to play with the Virginia Rush in the ECNL, a national club team. “She has won a state championship and was runner-up under my predecessor, coach Whitney Allison,” the high school coach said.


DeStefano, who has worked with Taylor the last three years, described her as a “fantastic soccer player.”


“She is incredibly fast, has a great burst of speed and has all the athletic tools required of a collegiate athlete,” he said. “Further, she has excellent technical skill and tactical knowledge, which isn’t a surprise when you consider her history. Avery attacks her opponents with quick bursts of speed and sudden changes of direction. She is highly adaptable and versatile as she can play numerous positions.”


Kati Tedfor, who also coached Taylor for Arkansas Rush from 2009-11, also praised her skills. “She is definitely a fast player with a great ability in the goal,” she said. “She is also great at getting behind the defense.”


She is a daughter of Mike and Stacy Taylor, and has a sister, Sydney, who also played soccer.