Savannah Pelley’s love for horses began in 2006 as happenstance when the family went for a trail ride while on vacation in Utah. After the experience, she was absolutely captivated with riding.

“She was bit by the bug. We couldn’t keep her away from it,” said Karin, Savannah’s mom. When the family returned from the trip, she began taking riding lessons. 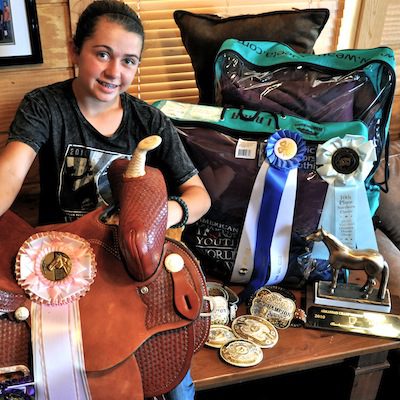 Savannah began to compete in the pleasure-riding portion of horse shows, but soon realized they did not satisfy her competitive spirit.

“Pleasure riding was left up to the judges, but in barrels and poles, it’s all about time,” Savannah said. “If you win, it is because you earned it, not just because of someone’s opinion.”

In 2007, Savannah acquired a pony named Comanche and began competitive barrel racing. She was successful in her endeavors, and after a competition in 2009, someone inquired if her pony was for sale. Her response: “No. My ponies are never for sale.”

Shortly after, the buyer contacted the Pelley family and said that they were so moved by Savannah’s passion for her horses, they wanted to give her a horse. Savannah began training on that horse, 23-year-old Popeye, and competed on him until he suffered an injury in September 2009.

Unsure of what to do after the injury, the Pelleys called their horse trainer and asked if he would be willing to train a Quarter horse the family had owned for a while, even though the equine had never been trained on a competitive level. The trainer was hesitant at first, but after observing the horse, he said, “How would you like to take your daughter to Youth Worlds?”

That very year, Savannah and that horse, endearingly known as Double O Seven, qualified for the Youth World Competition. The young lady and her family have travelled all around the United States to compete in horse shows and gain points for AQHA, the Arkansas Quarter Horse Association, which Savannah joined last year. Within her first year, she achieved the honor of “Arkansas Rookie of the Year.”

That same year, the horse, Double O Seven, gained the 25 points needed to earn him a Register of Merit. On Aug. 10, 2010, Savannah went to Oklahoma City where she competed with riders from all around the world. She placed fifth in pole bending and seventh in stake race.

At Arkansas Championship Horse Shows, Savannah won second in Buckaroo Poles, first in Buckaroo Horsemanship and fourth in Queens Class. “We go to horse shows just about every weekend, and even on some weekdays during the summer,” Savannah said.

Karin added, “We probably attended close to 30 shows in one summer.”

But the time and energy have definitely paid off. Savannah has already qualified for the Southern Regional 4H Horse Show, which will be held in Tunica, Miss. “If I could accomplish any goal, it would be to place first at Worlds,” Savannah said.

At this rate, she may do just that.

Enjoyed most at school: Field trips and activities like science experiments and dissections.

Who do you admire the most: My Daddy.

Favorite quote: “A setback is a setup for a comeback.”