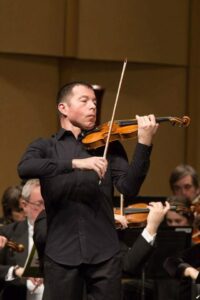 The Conway Symphony Orchestra will perform two classical favorites for the opening night concert of its 34th season, Mendelssohn’s Violin Concerto and Beethoven’s Symphony No. 3. Returning fans and newcomers alike are invited to enjoy the full 75-piece orchestra under the direction of Maestro Israel Getzov at 7:30 p.m. Saturday, Nov. 3, at Reynolds Performance Hall at the University of Central Arkansas.

In addition, Laskarov has announced that he will be performing on the 1712 ‘LeBrun’ Stradivarius made in Cremona, Italy, during the great master’s golden period. Getzov noted, “This is an extraordinary opportunity to hear a Stradivarius violin performed by a master like Kiril Laskarov. A great instrument like that amplifies the artist’s creativity and expression.”

Symphony No. 3 almost completes the decade-long Beethoven cycle which the Conway Symphony has undertaken. “Eroica,” as it is commonly known after its heroic origins, is one of the composer’s most celebrated works. The symphony was originally dedicated to Napoleon Bonaparte, whom Beethoven believed embodied the democratic and anti-monarchical ideals of the French Revolution. However, he later withdrew his dedication and his idealization of the leader when Napoleon declared himself Emperor of France.

The Conway Symphony Orchestra brings professional concerts, exciting guest artists and high-quality music to the Central Arkansas community.  For more information on concerts and other programs, visit ConwaySymphony.org or call 501.269.1066.