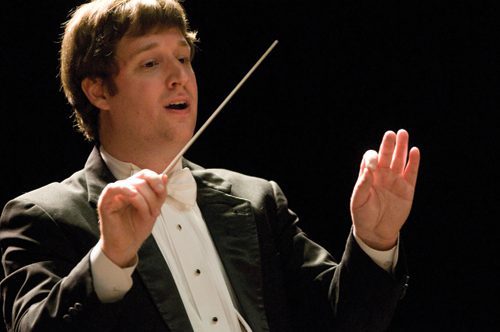 Over the years, what started as the Conway Civic Orchestra has evolved into one of the best symphonies in Arkansas. Music Director Israel Getzov compared it to the others in the state — the Arkansas Symphony Orchestra in Little Rock as well as those in Pine Bluff, Fort Smith, Fayetteville, Jonesboro, El Dorado and Texarkana.

“With our hall, our musicians, our format and our experience, I think our audience comes out of our performances enjoying them more than any other orchestra in the state,” Getzov said. “We don’t do long concerts, with all these pieces that are too long and bore the audience. I talk and explain; we pick the right music that’s interesting and the right length for our audience, so I would say our audience is the happiest.”

Moore joined the board in 1986 and served 19 years before stepping down two years ago.

“I’ve been with it almost from the inception, and the thing I’m absolutely most impressed about is the quality and number of people involved and the level of music they play,” he said. The “Silver Anniversary Concert: 25 Years and Counting,” which will feature Schumann’s Symphony No. 4 and Dvorak’s Cello Concerto, is scheduled 7:30 p.m. Tuesday, April 20, in the Donald W. Reynolds Performance Hall at the University of Central Arkansas.

“We are very excited to be celebrating 25 years,” said Vicki Crockett, CSO general manager. “It’s a good time to look back at where we’ve come from and where we’re going.”

According to conwaysymphonyorchestra.org, the orchestra was originally a joint project of the music departments at UCA and Hendrix. Its debut concert was in 1984. Moore said during the early years, the arrangement between the two schools included one providing a conductor and the other a venue, with the roles reversed each year.

That student element is what is attractive to many.

“It’s just fun to work with the students, and I feel more enthusiastic about the concert,” said Carl Anthony, principal keyboardist who also plays in the Arkansas orchestra.

“The students rehearse a lot more,” he said. “The Arkansas Symphony usually puts a concert together in a week or less. I don’t mean to knock the ASO, but sometimes we go in and play, and it’s almost just a job. Not that we don’t play well and enjoy what we’re doing, but working with students makes it more fun.”

Getzov agreed that it’s difficult for professional musicians not to get stale after playing a symphony for the 100th time.

“The students learn sitting next to the professionals, but what some people don’t recognize is the excitement they bring that rekindles the spirit of the older musicians by somebody experiencing the music for the first time,” he said. “That’s a special element, and it goes both ways.”
Carolyn Brown, principal flutist with the CSO who has been with the orchestra since its early days, also plays with the ASO.

“Quite often in the woodwind section, students get to play the principal parts,” she said. “That’s one of the really great benefits of students coming to UCA — they get to play in a professional orchestra. That’s unusual throughout the United States, to have a group like that where students routinely work with professionals. Nowhere else (in Arkansas) do you have students playing such an important role.”

The orchestra played an initial schedule of two classical concerts per year. In 1986, an informal Concert in the Park was added; that’s when Moore got involved. A concert for schoolchildren was added in 1995, and four years later, a holiday concert and a children’s concert to introduce youth to live symphonic music joined the series. During 2007-08, a mainstage Pops concert made it a six-concert season.

Moore pointed to a decision in the late 1990s by Driggers to tie the permanent conductor’s position to UCA’s Department of Music as a pivotal point in the orchestra’s direction.

Getzov, director of orchestras at UCA, said 14 UCA music faculty members currently play in the CSO. About 30 CSO musicians — 35-40 percent of the orchestra — play in both the CSO and the Arkansas Symphony.

Getzov, 33, was associate conductor of the ASO from 2001-05, when he came to Conway. In the interim, he had also played some with the Conway group.

“All young conductors want to be the captain of their own ship,” he said of his decision to make the move. “It was a combination of the fact that the (Conway) orchestra had a mission for training and for education, and the fact that I already knew most of the professional musicians in town and most of the students, that I knew the community, made me feel like it would be a good match.”

That has proven to be the case.

“We’ve had a variety of conductors, some better than others, but Izzy is certainly the best we’ve had, and he seems very committed to the group and wants to see it succeed,” Anthony said.

Brown said over the years, the orchestra had benefitted from good board direction and that each conductor had left his mark on the group. “Each director sort of took it to the next level and initiated certain changes that were helpful at that time.”

Moore also praised the work of Crockett as well as one of her predecessors as general manager, Kelli Stauffer Gordon, who has returned to the group as a board member this year.

“She went to a symposium for the American Symphony Orchestra League (now the League of American Orchestras) in 1999 and came back with several things we needed to do,” Moore said of Gordon. “One was to stop offering free concerts because if they’re free, people think they’re not worth anything.

“One of the greatest things that’s happened is the cross-section of members of the community who’ve served on the board. We’ve had a wonderful assortment of people who’ve been very dedicated.”

Getzov is pleased that the CSO has been able to capture the top professional and student talent in the state. “There were some transition years that happened before I came in, but we’ve been able to get people to rally around the orchestra, which created stability,” he said. “We made some decisions, used our resources wisely and encouraged people to get behind the institution.”

Through his first five years, Getzov’s been proudest of the enthusiasm of the people involved with the CSO. “Everybody who’s either been in the audience or on the stage has been touched by the buzz, the excitement, that a good orchestra can create,” he said. “My vision for that excitement has spread to other people, and to me, that’s the most exciting part.

“We’re heading in a great direction, and I’ve seen so much growth. It’s been really enjoyable for me to work with them because they give me a lot of energy.”

Moore said the best benefit of having the CSO in the 501 is what it adds to the quality of life. “This is our hidden treasure, Conway’s little secret,” he said. “There’s a quality and art form here that very few cities have the luxury of enjoying.”