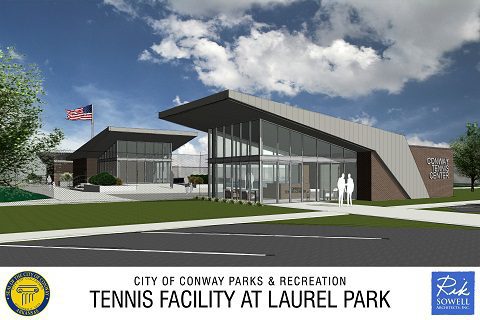 The new City of Conway tennis facility, which features eight outdoor tennis courts at Laurel Park, will see its first tournament this month.


The Conway Regional Tennis Classic is planned Friday, April 27, through Sunday, April 29, at the new facility, located at Laurel Park on Prince Street.


The features of the Conway Tennis Center include:


There will also be a crosswalk across Prince Street to provide easy access for the Conway High School Tennis Team.


Construction began on the project in August and will wrap up in early April. The City of Conway appropriated $2.5 million from the Parks Department Advertising and Promotion (A&P) Fund for the project. Corco Construction is the general contractor.

Players from all over the state are expected to play as this is a “sanctioned” tournament with play contributing to rankings within the USTA system. The cost is $30 for the first event and $22 for the second event. Entries must be submitted by Tuesday, April 24.


All entrants will receive a T-shirt, light food throughout the tournament and a full lunch sponsored by Centennial Bank on Saturday.


Prizes will be awarded to first, second and consolation winners.


The Conway Convention and Visitors Bureau is also a sponsor.


For more information about the tournament and to sign up, visit conwaytennis.net.