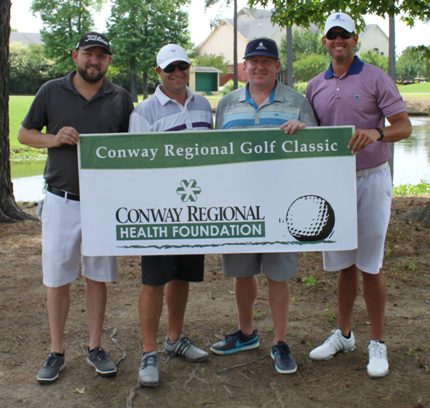 The Therapy and Rehab Solutions-Smith team won the first flight and afternoon round of the 19th annual Conway Regional Golf Classic on June 8 with a score of 53. The team consisted of Dr. Jevin Smith, Andy Harris, Monty Longing and Greg Lanford.


The second and third best team scores in the afternoon were a 55 shot by a Therapy and Rehab Solutions-Throneberry team and a 58 shot by the Trinity Development-Frazee team.


The second flight in the afternoon was won by the Farris Agency with a 62 followed by Trinity Development-Salter second and Trestle Tree third with a 63.


Twenty-eight teams played in the afternoon as temperatures hovered around 90 degrees.


A number of individual awards were presented in two rounds: