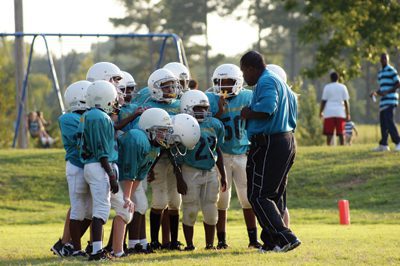 Fourth- through sixth-grade boys and girls who want to learn to play football have that opportunity thanks to the Conway Optimist Youth Football Program.

On average, 400 kids participate every year; some participants are already experienced and some are throwing a football for the first time in their life.

In more than 40 years as a youth football coach, Ron Hill has taught three generations of kids the basics of football. He recalls teaching a boy who is now a grandfather, that man’s son and most recently his grandson. Hill’s team, the Steelers, is one of 12 teams in the league.

Curtis Walker Park, located off North Museum Road in Conway, is home to the league’s practices and games. Members of the Optimist Club ensure that league games are full-fledged events, complete with announcer commentary and a concession stand.

When he was in elementary school, Greg Lasker – a Conway native and former NFL defensive back – played on Hill’s team for three years. More recently, Peyton Hillis, before he went on played for the Cowboys, another team in the league, before moving on to Conway Junior High football.

Despite the big names who got their start in the Conway Optimist Club’s program, Hill makes it perfectly clear that the club’s main purpose is not about fierce competition or skill. He insists that it’s all about being a kid.

“We literally play to have a good time,” Hill said. “Kids are kids, regardless of ability. They want to talk to you, to know that someone cares about them. This program is about everybody getting a chance to play.”

In every league game, coaches are required to play each player for at least one quarter. Hill said the fact that every kid on a 35-person team gets this amount of playing time boosts confidence and allows a learner to hone his game.

“Some of these kids will go on to play high school football,” Hill said. “Some will never play again. But they all get a chance to be a star for a little bit, to step up and play their hardest.”

Ben Thompson, commissioner of the football league, said many people are confused by the purpose of the Conway Optimist Club despite the fact that it has been around for many years. He said there are five different Optimist Clubs in Conway, each with a different purpose that’s geared toward sponsoring youth activities.

“Each club can decide what activities it wants to pursue,” Thompson said. “We have done football for years, and around Christmas we host the Angel Tree [gift drive].”

Thompson has been working with the football program for 15 years and plans to stay indefinitely. Once they get involved, coaches and staff usually keep helping with the program, he said. Apart from Hill’s long involvement, there are several other coaches who have been with the club for more than 20 years. Sponsors also tend to stick with the club – The Carpet Center and Farm Bureau are examples that have funded league teams for decades.

“The club is helpful because at this age group kids don’t have football in school,” he said. “A lot of kids will go on from here to play junior or senior high. We mainly concentrate on the basics of the game to get them started. I’ve had high school coaches tell me they know when a kid has gone through our program because it’s apparent that they already know all the basics.”

The 12 teams in the league are divided into the blue and gold divisions. Throughout the year, teams will play other teams in their own division. The year culminates in playoffs and a simulated Super Bowl.

“The Super Bowl is always popular,” Thompson said. “We get a lot of great parent support. The winning team gets a trophy and all the kids on that team get trophies.”

Thompson and Hill agree that kids learn more than the basics of football. The program emphasizes respect, teamwork and duty both in and apart from the game. For instance, kids regularly maintain their field after they are done practicing. They even learn about philanthropy through seasonal food drives for the Bethlehem House.

For a schedule of games or for more information on the club, visit conwayyouthfootball.com.

Hill said every year he gets tapped on the shoulder by someone who asks, “Hey, Coach Hill, remember me?” More often than not, he remembers. “People don’t always realize how phenomenal kids are,” Hill said. “Just to be around them is a great thing.”