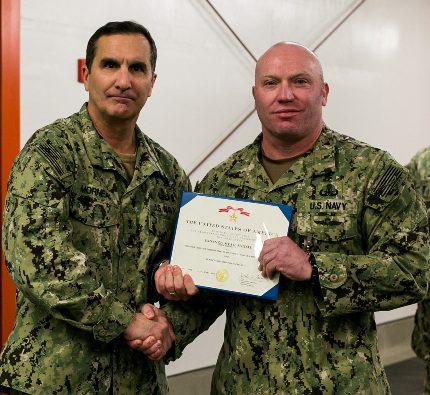 Conway native Scott Weaver was presented earlier this month with the Bronze Star Medal for his actions during Operation Enduring Freedom in Afghanistan.


A 1994 graduate of Conway High School, Weaver was cited for heroic achievement in connection with combat operations against the enemy while serving as the TRIDENT 2211B Explosive Ordnance Disposal team leader, Special Operations Task Force-Southeast in direct support of Operation Enduring Freedom on Apr. 9, 2012.


Weaver said during the ceremony, "Looking out at all of you here today, I know any one of you wearing the badge would have done the exact same thing if you were in my shoes."


During a combined reconnaissance patrol in the Arghandab River Valley, he and his patrol came under enemy fire from multiple locations. After his squad commander was wounded in the leg by a bullet, Weaver, with total disregard for his own safety, ran to his position to help. He pulled his squad commander from the area and immediately began stabilizing medical treatment before transporting him to a safer location and then returned to his comrades to continue fighting.


When asked how he felt about receiving this award Weaver said, "I do not consider myself a hero, but I have served beside many heroes in some very harsh places."


In 2012, the city of Conway recognized Weaver’s military service and sacrifice during a special ceremony. While home in Conway visiting family, he was honored with a mile section of the Tucker Creek Trail named the “Weaver Mile.”


His mother, Kathy Timmons, is a resident of Jacksonville and his father, Mike Weaver, lives in Idaho Springs, Colo.