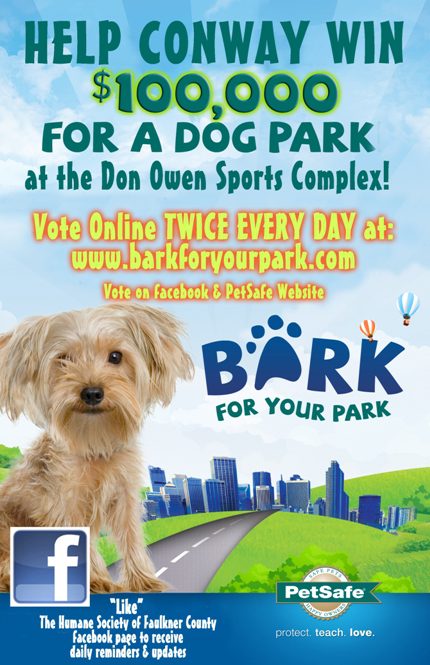 After competing against 400 cities nationwide, Conway was named a finalist in a contest to win funding for a new dog park.

The PetSafe Company announced 15 finalists in its “Bark for your Park” contest, in which cities are competing for online votes for a chance at a $100,000 grand prize.


Humane Society of Faulkner County Volunteer Judi Standridge nominated the city for the contest in hopes of finally bringing a dog park to Conway. Local supporters hope to win either the grand prize or one of four additional $25,000 prizes to help fund a new park at the Don Owen Sports Complex. The PetSafe prize winnings would be used for fencing, benches, dog waste stations, lighting and water access at the new Conway dog park.


Online voting is under way now and ends on Friday, July 26. Supporters can vote twice every day – at BarkforyourPark.com or find direct voting links and updates on the Humane Society of Faulkner County’s Facebook page or website.


“We are so excited we made it through the first round,” said Judi. “But now we need the people of Conway to rally behind this contest to help us win. We urge you to go online and vote twice every day and ask all your friends and families to vote too."


In addition to online voting, Conway will also submit a video commercial which will be used to encourage citizens to vote. PetSafe will announce contest winners on Wednesday, July 31.

Bark for your Park, The PetSafe Company