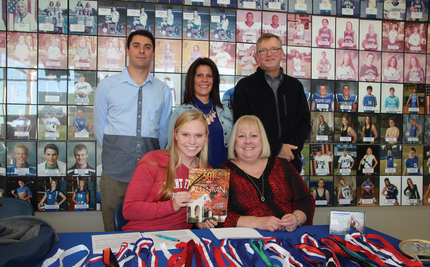 Crnic will swim at Saint Francis University in Loretto, Penn., where she plans to study finance and accounting. She is a daughter of Melanie and the late John Crnic.


A swimmer the last seven years, she has been on the high school team the last four years. A mid-distance freestyle swimmer, she has earned all state and region honors.


In addition to Saint Francis, Crnic also had an offer from Henderson State University at Arkadelphia. “It (Saint Francis) just had everything I wanted, with a strong focus on academics, which was a big thing,” Crnic said, adding that the swim team was “super friendly.”


Family, friends and teammates were on hand for the ceremony, held at Buzz Bolding Arena. “She’s been a wonderful swimmer, and it’s been a privilege to have her on my team,” said Conway High swim coach Christina Rye. “She’s been an asset to my program, and I’m so tickled that she’s signing with a college and will get to swim another four years.”


Her former coach, Evan Johnston, and Aquakids head coach Tony A. Marleneanu also spoke at the ceremony, noting her successes as a swimmer.


Marleneanu, who has been her coach the last two years, expressed his pride in Crnic’s accomplishments. “This is why we coach, for these moments,” he said. “It’s great to see one of your swimmers go to the next level.”