Posted at 11:51h in Sports by Levi GIlbert
Share 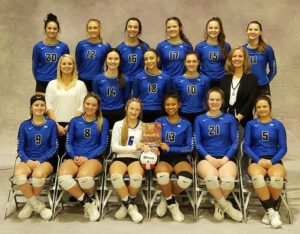 The Conway Lady Cats volleyball team beat Fort Smith Southside in four sets (25-13, 24-26, 25-15, 25-22) in October to win the 6A state championship at Bank OZK Arena in Hot Springs. It was Conway’s first volleyball title in 20 years, and it came against a team that had bested the Lady Cats twice already in the regular season.

“In the final match-up, I felt like we studied Southside a lot and made some defensive adjustments that helped us out,” said Conway Coach Laura Crow. “Our passing was also a lot better, so we were able to run our offense and make things work for us. Our blockers knew what players to key in on and their tendencies, which helped. I also felt like our defensive specialists knew where to be in relation to where our block was set.”

The Lady Cats lost only one set during the state tournament as they ran through Cabot and Har-Ber in straight sets on their way to the final showdown with Southside.

“The girls were extremely focused,” Crow said. “They spent a lot of time watching film on our opponents. I think they were ready to play and excited for the outcome. I feel like we peaked at just the right time, and everyone seemed to be clicking and on for the matches.”

Karli Ferguson was named state tournament MVP with 43 kills, three aces, 13 blocks and 16 digs. Emma Begley and Madison Bates were also both named to the all-tournament team. Ferguson and Matti Fairchild earned all-state honors this season (in addition to all-conference), and Begley, Bates and Jessica Gunnels were named to the all-conference team.

This marked Crow’s first state championship. She’s coached at Conway for eight years. The Lady Cats graduate 10 talented seniors from this championship squad, but a group of talented underclassmen wait in the wings to take the lead.

“Every year, the girls always surprise me,” Crow said. “They usually just step right in and do a great job, so I am expecting that from this bunch of underclassmen we have now.”