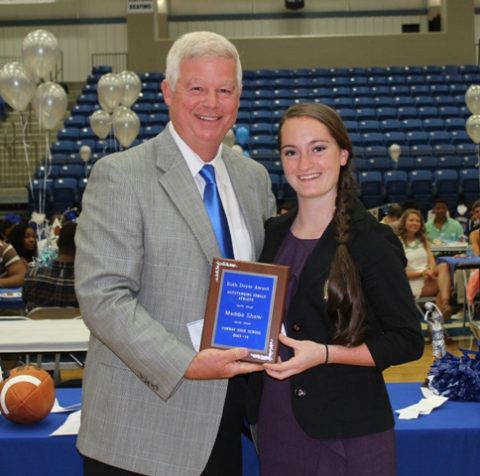 The event included a dinner for student athletes — provided by Virco Mfg. and prepared by Gary Crockett — followed by a program.


2012 CHS graduate Derek Walter, who attends the University of Central Arkansas, was the emcee for the event. He introduced each senior and shared information on their sport, accomplishments and future plans.


“During the 2013-14 school year, the athletic programs have been very successful,” he said. “This is a direct result of hard work, dedication, teamwork, sweat and long hours.”


Each received a $500 award from Conway Corp. to continue their education.


“Every year an award is presented to the top male and female athlete as voted on by the coaches,” Walter said. “These athletes demonstrate a winning attitude, hard work and dedication to their sport and teammates.”


Outstanding athlete awards were presented to Maddie Shaw and AJ Burton. Each was presented with a $250 check from Conway Corp. to continue their education.


Shaw, who was presented the Ruth Doyle Award, lettered in softball four years and was selected all-state one year and all-conference two years.

Other athletes recognized were: