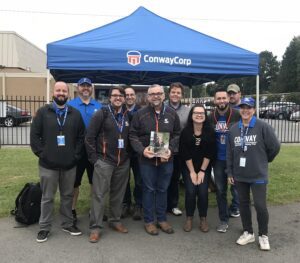 Members of Conway Corp’s 5 Sports Crew were “Loving LIFE” as they celebrated a broadcast milestone.

The company began broadcasting Wampus Cat football games in 2001 with announcers Jeff Matthews and Jim Files, producer Steve Stone and executive producer Linda Johnson. Games were broadcast on Conway Corp Channel 81 and were only available on a tape delayed basis the week following and each game was on the air twice.

In the early days of the broadcast, only Stone and his production crew were at games on Friday nights. The game would be filmed and then edited into its final version before Matthews and Files would provide commentary.

“Jim and I would go to Steve’s studio and put on headsets and call the game from a TV screen,” Matthews said. “We didn’t have the luxury of the scoreboard, so we never were really sure how much time was remaining or the down and distance – which we were reminded pretty early is critical information for the fans and the announcers also.”

Eventually, the announcing crew would join the production crew on Friday nights and games would be recorded live for playback on tape delay.

Beginning this season, both home and road football games are being broadcast live to not only Conway Corp cable customers – but to any internet connected device in the world through YouTube on the company’s website conwaycorp.com/wc2go.

The football broadcast has been recognized four times by the Mid-America Cable Association with awards for excellence for local programming.

“We are proud to partner with Conway Athletics and local sponsors to continue providing coverage of the Wampus Cats,” said Bret Carroll Conway Corp CEO. “Our team puts together a great product and having 200 broadcasts is a huge accomplishment.”