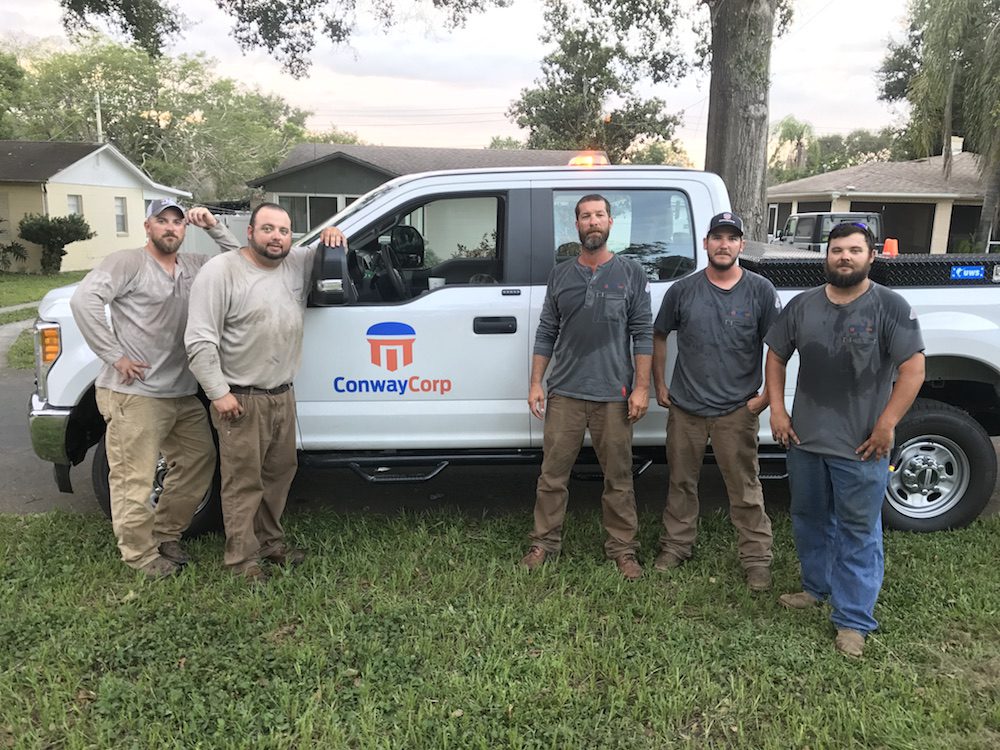 Five Conway Corporation employees saw firsthand how Hurricane Irma ravaged Central Florida, and offered a helping hand to those devastated by the storm.

The five, who volunteered for the assignment, found out Sept. 6 that Conway Corporation would be assisting, and left 6 a.m. the next day.

While the utility has offered assistance in Arkansas, this is the first time that Conway Corporation has sent workers out of state.

“Mutual aid agreements are extremely important to us and other municipal utilities as they allow us to offer and receive assistance when major storms or natural disaster require restoration work that is beyond the capacity of our crews,” said Conway Corp CEO Bret Carroll. “The employees at Conway Corp strive to serve our customers with excellence every day but on occasion, an opportunity is presented where they can really go above and beyond and this was one of those occasions.”

When asked why he volunteered, Ussery’s response was “Why would you not?” He added that he knew Florida residents were going to need help and it’s nice to help others. “They needed it.”

Lauer said there was a sense of satisfaction in helping individuals who had been without power for two weeks. “You can’t believe the elderly people that have to have electricity.”

Not sure what they were going to need, the crew packed provisions, including cots and other supplies. “We were hoping for the best but preparing for the worst,” Ussery said. Fortunately, they were able to stay in a hotel near Orlando and their meals were provided.

As the crew headed south, they encountered long lines of traffic headed in the opposite direction as residents tried to get out of Irma’s path.

Sometimes, the Conway Corp vehicles were the only ones on the one side of the highway while there was a 200-mile traffic jam on the other.

“It’s an eerie feeling,” Ussery said, adding that it was a challenge at times to get fuel. He said at some stations there were many parked vehicles that were out of gas and the service stations too were out of fuel.

“That’s just linemen. Everyone runs from the storm and we run to it,” Heer said. “It’s part of the job.”

“Linemen are a certain breed of people,” Lauer added.

While some of the crew had provided mutual aid in-state, the aftermath of an Arkansas ice storm paled in comparison to the destruction left behind by Irma. In recent years, the only time when crews came to Conway’s to provide assistance was after an ice storm in 2000.

Heer said while the crew waited out the storm in the hotel, there were 50 to 60 mph sustained winds that blew continuously for nearly eight hours, with big gusts. “I’m glad we don’t have that here,” Ussery said. “It was like a thunderstorm that never ended.”

When conditions allowed the next morning, the Conway Corp crew joined others in beginning the arduous task of restoring power to 160,000 customers in the area. “We figured we’d be there awhile,” said Heer, adding that the wind had to be less than 40 mph before the work could begin. “When it hit 39, it was time to go. The whole next day it was still whipping outside but not a lot of rain.”

After the hurricane, the landscape was littered with downed power poles and lines, small and big trees that were toppled, scattered tree limbs and other debris. One area was described as a “jungle of wire and trees.”

“There was lots of water,” Ussery added.

What followed were long days – 5 a.m. to 9 p.m. – in the hot and humid Florida climate as the crews went from neighborhood to neighborhood working to get electricity restored. The heat index measured about 105 degrees.

The crew said most of the Florida residents they encountered were very appreciative of their help, even though they had no hot water, no air conditioning, were living out of an ice chest and their basic needs were not being met. Some even shed tears when the crew arrived. “People were honking and waving,” Heer said. “They were as nice as they could be,” Ussery added.

“I was just blown away by the people, their attitudes and how thankful they were,” Brown said.

“They were glad we were there and so were we,” added Ussery.

Lauer said he was particularly moved by older residents who had been without air conditioning and their oxygen for days because of the hurricane. Among them was a 100-year-old man who had been in the heat without his oxygen for two weeks. “When we got the power back on, it made you feel good,” Lauer said.

Heer said at one evening meal, a couple approached the crew and insisted they take $100. “We tried vehemently to give it back but they wouldn’t take it back. They wanted us to keep it,” he said, adding that the money was used to cover expenses. “That was kind of cool…That’s what stuck out most to me, how nice everybody was.”

The Conway Corp employees were complimentary of the crews from other states that they worked alongside with during the hurricane recovery. “We work with a great group of guys and all the guys that were there were a great group too,” Lauer said. “Everyone was exceptionally nice.”

Kolt described the trip as a once-in-a-lifetime experience. “I’d go back,” he said. “We worked hard but it was a good time when we were working. There wasn’t a day that I wasn’t soaking in sweat.”

Heer said the trip had an impact on those who went. “It makes you appreciate our system and infrastructure,” he said. “Our system in Conway is well-built and well-maintained.” Ussery added that most Conway Corp customers are not aware of how nice the local system is. “It’s just a better built system. It makes you appreciate it a whole bunch,” he added.

The crew returned Sept. 23, missing family celebrations, children’s ballgames and community events while they were gone. “There were lots of sacrifices in their families,” said Crystal Kemp, manager for marketing and public relations at Conway Corp. “That’s the heart they have and the way they serve. That’s the way they serve the people of Conway, too.” She added that there are times when they report to work after a damaging storm when their own family may have been impacted. “It’s a special kind of person that does that.”

“It’s not just us down there working, it’s a wife at home taking care of everything and grandparents chipping in to help,” Ussery said. “It’s not just the one person going. It’s an entire family’s efforts that make it happen.”

Carroll noted that while the five-man crew went to serve customers in the Orlando area, the whole department would have traveled to Florida to assist had they not been needed in Conway. “Customers in the Orlando area got just of bit of what we sometimes take for granted in Conway; employees that truly love what they do and care about their customers,” he said. “Jim Moore and his team are well prepared to do what is needed to get the job done; they made us proud and we know we can count on other municipal utilities to help us should there ever be a need in Conway.”

The five expressed appreciation to Conway Corp for giving the employees the opportunity to participate and to their spouses and family members who helped pick up the slack while they were gone. “We all felt really gracious just to get the opportunity to go and to be chosen to go,” Heer said. “Everybody who works with us would have gone, if they could have.”

Conway Corp employees are ready to hit the road again to provide assistance when the need arises. “It’s inevitable. It will happen somewhere again,” Ussery said.