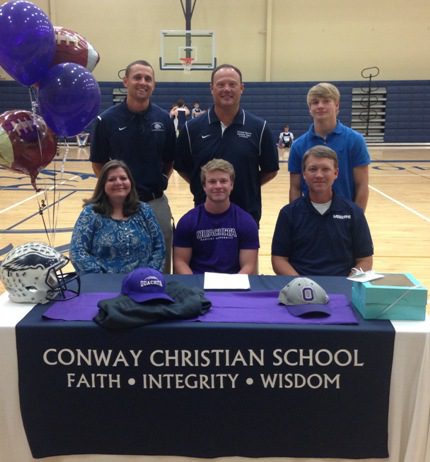 13 May Conway Christian seniors taking talents to next level

Minner committed to play tennis at John Brown University in Siloam Springs while Smith signed as a kicker for Ouachita Baptist University in Arkadelphia.


Ross Minner is a three-year letter winner at Conway Christian. He is the two-time defending district champion in boy’s singles, and finished state runner-up in back-to-back years. He was also named to the 2014 2A All-State team. Minner also played basketball for CCS, and holds a 3.99 GPA.


“Ross has meant a great deal to our team and to me personally,” said Coach Penny Vaught. “I couldn’t be more proud of this young man. He has been rewarded for all his hard work. I know he is going to do great things at JBU.”


Josiah Smith has played varsity football at Conway Christian for three years. After suffering injuries in both his sophomore and junior seasons, he focused on kicking, with training from Chris Boniol of the Dallas Cowboys, Brian Egan (former Mississippi State kicker) and prokicker.com.

Smith was named All-Conference and Special Teams Player of the Year in 2013 and 2014. He also plays baseball for CCS, and holds a 3.76 GPA.


Asked about Smith, Coach Michael Carter said, “Josiah is a young man of tremendous character and comes from a great family. He has dealt with more than his share of adversity with injuries, yet he has risen above them every time. I am excited that he has received this opportunity, and I know he will be successful at OBU. I am truly blessed to have been his coach these past three years.”