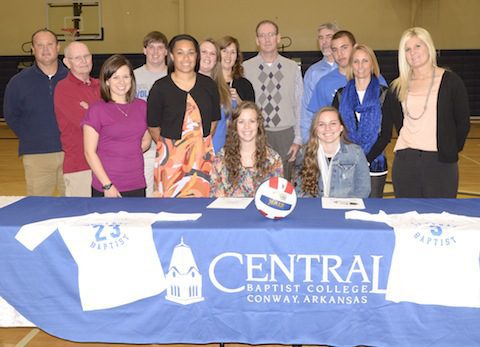 Payton is a daughter of Dean and Cindy Cope and attends New Life Church. Payton has played varsity volleyball at CCS for four years and began playing Junior Olympic volleyball when she was 10.


Olivia is a daughter of John and Holly Meriweather and attends Antioch Baptist Church. She has played varsity volleyball at CCS for four years. She was named All Conference in 2010, 2011 and 2012, Cave City Tournament MVP and All State Tournament Team 2012. Olivia plans to major in physical or occupational therapy at CBC.


Both players have been a part of the Conway Christian varsity team since ninth grade. They have made it to the state tournament every year. Payton and Olivia were the captains for this year’s team.


“Payton and Olivia are excellent all around athletes. They hustle and give 100 percent all of the time,” said coach Suzanne Feimster. “These girls have worked extremely hard and their dedication has paid off. I am so proud of them and will be expecting great things from them as they pursue the sport they love at Central Baptist.”