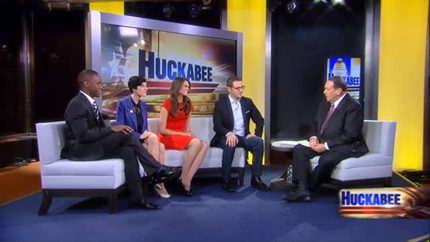 The voice of the millennial generation is powerful – and one that is increasingly receiving more attention.

Former Arkansas governor and political commentator Mike Huckabee recently addressed this topic on his Fox News show “Huckabee” in a segment titled “Does the GOP need to start listening to millennials?”


Huckabee, a 1976 Ouachita alumnus, hosted a panel of three college students including Ouachita senior Molly Bowman, a mass communications and Christian studies/theology major from Conway. During the segment, students discussed issues of concern to millenials and how they felt about the current state of the Republican Party. Other panelists included students from the University of Notre Dame and Marist College.


Huckabee contacted his alma mater, looking for a Ouachita student to add to the panel. After consulting with several campus leaders, Trennis Henderson, vice president for communications, decided to submit Molly Bowman’s name for consideration.


“With Molly’s strong academic record, campus involvement and international travel experience, several faculty and staff members suggested she would be a great fit,” Henderson said. “Molly was eager to accept the challenge and did a great job of representing Ouachita.”


A graduate of Conway Christian School, Bowman has served as an intern and a writer/photographer at 501 LIFE.


Bowman was interviewed by the producer over the phone about her worldview and opinions on how the nation’s authority figures should handle various situations. Within 30 minutes, Bowman was chosen to participate and booked on a flight to New York City. The whirlwind experience included Bowman being recommended on Wednesday, contacted by the producer on Thursday, flying to New York on Friday and taping the show on Saturday.


“I am so proud of our university and the truth that it actively takes a stand for, so it was easy for me to wear the Ouachita name with confidence,” Bowman said. “I think Ouachita’s liberal arts education has helped me to communicate more effectively on every realm. I am not a political science major, nor do I see myself as an expert on the topic, but OBU has instilled in me a love for learning and interacting with the world around us.”


On the panel, Bowman had the opportunity to communicate some of her views about what attracts her to a political candidate or cause. Bowman emphasized her desire for candidates to possess consistency, explaining, “I want someone that is going to back up what they say. I think most of the millennials get frustrated when they see someone in their campaign make promises they can’t keep.


“My goal for the show was to speak truth with grace and love,” added Bowman. “My desire was to treat others with respect while representing Christ and our university well both on camera and behind the scenes.”


“Our students are excellent ambassadors for Ouachita in a variety of settings,” noted Henderson. “Molly’s role on the ‘Huckabee’ show was a great opportunity to provide Ouachita national exposure while highlighting the quality of our students and their educational experience.”