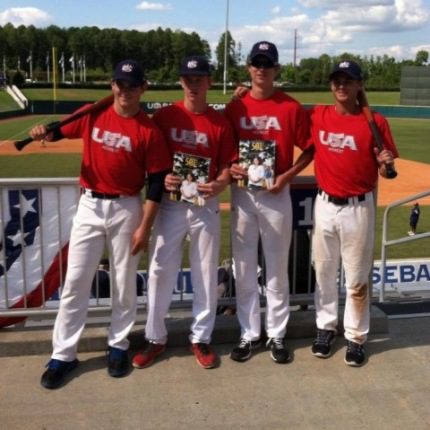 
Four Conway High baseball players recently tried out for USA Baseball National Teams. Jacob Adams, Conner Williams and Mitch Jones tried out for 17U team, and Bubba Carter tried out for the 16U team.

The initial tryout process began for Arkansans at one of three places: University of Arkansas, University of Central Arkansas or Arkansas State University. Players tried out at one of these locations in hopes of becoming one of 18 players selected to represent the state in St. Louis to play games in the Midwest National Team Identification Series (NTIS) against the states of Missouri, Oklahoma, Kansas and Nebraska.


“All of the boys tried out in Fayetteville on July 17,” said Billie Carter, father of Bubba Carter. “Just at Fayetteville there were over 100 boys trying out to be one of the 18 players selected.”


“The boys had to perform at their respective positions, which required fielding and throwing, running and batting skills, and were evaluated by coaches and scouts,” Billie said. “Each boy had to display his talent at his respective position. In regard to Bubba and the other pitchers, they warm up and then are called out to the mound and are asked to throw a limited number of pitches (fastballs, breaking balls and change ups). Not only are control and movement evaluated, but velocity also plays a huge role.


“From the evaluations, they were all chosen and placed on their respective age teams [to represent] Arkansas.”


The Conway boys played in St. Louis from Aug. 9-11, and each state team had 18 players. From the games in St. Louis, USA Baseball took only 18 players to represent the Midwest in Cary, N.C., at the USA National Baseball Complex, which was held Aug. 22-25.


After the whole process, the tryout at U of A, playing and being evaluated in St. Louis and playing against other regions from around the country in North Carolina, a live announcement was made on usabaseball.com Friday, Sept. 13.


“[USA Baseball] was only going to take eight players from all the 16 regions total, which for 16U was over 350 boys, and 17U was over 300,” Billie said. “No player from Arkansas was chosen, but what a perfect and blessed experience. We are excited for the opportunity that Bubba has had. Only God knows the plans he has for us, and regardless the outcome and the destination, we will always give God all the glory.”

Williams and Jones are seniors this school year, and Adams and Carter are juniors.


“The National Team Identification Series took another step forward this year,” said Rick Riccobono, USA Baseball’s senior director of development. “With the assistance of our regional partners and members of the collegiate and professional baseball communities, we were able to improve our evaluation process this year while adding 188 additional players to the program. The event is the starting point of identifying the next crop of athletes to represent the United States in baseball.”