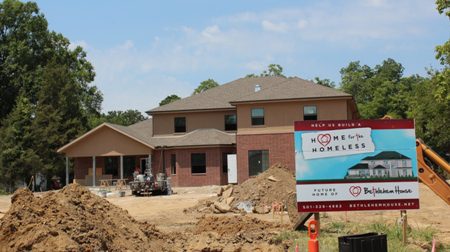 
Homeless residents may have a new shelter in Conway quicker than originally anticipated – September instead of November.

According to Bethlehem House Executive Director Judi Lively, construction is on schedule and “things are going great.” Sheetrock is in place and the upstairs and downstairs have been painted. Bathroom vanities have arrived and some of the inside doors have been hung.


“The (recent) walk-through of the new facility was quite exciting!” she said.


Judi has high marks for those leading the project for Nabholz Construction Services – superintendent Doug Price and project manager Beth Maris. She said while there may have been some initial delays due to weather, time is being made up with an efficient scheduling of sub-contractors.


“They have done an excellent job,” Judi said. “I feel like they have what’s best for Bethlehem House in mind.”


Judi said the construction team has projected completion in September since work began but in her mind she always anticipated it would be November. “I just wouldn’t accept that,” she said, adding that the team has convinced her that September will likely be a reality.


Funding for the project included several large grants and gifts, including $250,000 from Conway Corporation, $150,000 from the city of Conway through the Community Development Block Grant Program, a matching grant of $230,000 from the J. E. and L. E. Mabee Foundation Inc. and $200,000 from The Windgate Charitable Foundation.


According to Judi, some unexpected expenses have come up during construction and Bethlehem House will have a small mortgage on the new shelter. “It’s still amazing we had that much funding come in,” she said.


While pleased with the fundraising efforts, Judi notes that the agency’s operational account “has really taken a hit” which may be normal following a capital campaign. “I don’t want that to sound dire, but it is a need.”


Several fundraising events are in the works which Judi and others hope will help boost the operational fund. Among those, Faith Church of Conway is hosting “Hoops for the Homeless,” a 3-on-3 Basketball Tournament, on Saturday, Aug. 3. The fee is $40 per team. All games will be held at the Don Owen Sports Complex on Lower Ridge Road in Conway from 9 a.m. to 6 p.m. on Aug. 3.


For more information or to register, visit hoopfestforthehomeless.eventbrite.com or contact Faith Church of Conway at 501.327.9094.


The other events are planned this fall, including The Village Winter Tour of Homes and Empty Bowls fundraiser.


In addition to the operational fund, the shelter’s food pantry is low, with the exception of corn and green beans. “Historically this is a slow time for giving,” Judi said.


Still, it is an exciting time for Bethlehem House, according to Judi, and plans are being formulated for the move to the new facility. Judi said the first goal will be to vacate two buildings that are being leased. A ribbon-cutting and open house will also be scheduled.


Aimee Prince, president of the shelter board, described the construction progress as very exciting. “Thanks be to God, we are so close to being able to offer a wonderful new facility to those we serve every day” she said. “We can’t thank those who have prayed, given time and given financially, making this dream a reality.”


Judi points out that the new facility, while not fancy, will have several special features including space for a computer lab and a place for residents’ children to play.


“Every time I walk through, I am humbled,” Judi said, adding that she is appreciative of the community’s giving nature. “It’s an amazing dream come true. It’s really taking shape.”